We all know them – the Instagram accounts that are all about animals. Dogs, cats, hedgehogs, and even foxes pose in front of the camera and get lots of likes for it.
At first glance, it doesn’t seem like much is wrong with the cute animal images.
But unfortunately, there is often animal suffering behind the photos.

For many pet-fluence owners, it’s not just about sharing their animal roommates with the world, but also about making money with it.
They conclude advertising deals, for which the dog is placed next to food cans, the cat is put in a backpack or the hedgehog is placed next to a water bottle.

Social media like TikTok, YouTube, and Instagram don’t stop at pets either. Domestic and wild animals are increasingly being used as “pet-fluencers”.
The animal counterparts to influencers delight millions online – and turn over millions.
The other side of the coin: animal cruelty is often hidden behind success.
Some Instagramer earns so much money with it that they have become self-employed and photograph and post their animals full-time.

How are the animals really doing?

Actually, every animal lover should be aware that animals are not and do not want to be photo models.
With pet-fluence, no spontaneous snapshots are posted, but the animals are staged, draped, disguised, and even brought into dangerous situations for them.
For example, it scares a hedgehog to death if it is held next to a cat – its “predator” – for a photo. And all to amuse the followers and for profitable advertising deals.

Most animals find costumes and disguise bothersome and irritating.

Some costumes even limit their movement extremely and they would like to shake them off immediately. Animals also don’t understand why they have to hold out in an unnatural position until the perfect photo has been taken.
Animals just want to lead a species-appropriate life in peace.

Earning money with animal pictures on Instagram is even more problematic when it comes to torture breeding or wild animals. Tortured breeds such as bulldogs, pugs, or Persian cats suffer all their lives from the consequences of overbreeding – they can hardly breathe, their eyes water, their joints are damaged and they usually do not live long.
African white-bellied hedgehogs often suffer from diseases, genetic defects, and die very early due to massive inbreeding.
All this suffering is kept secret on Instagram and the followers get a completely wrong picture of the animal breeds. 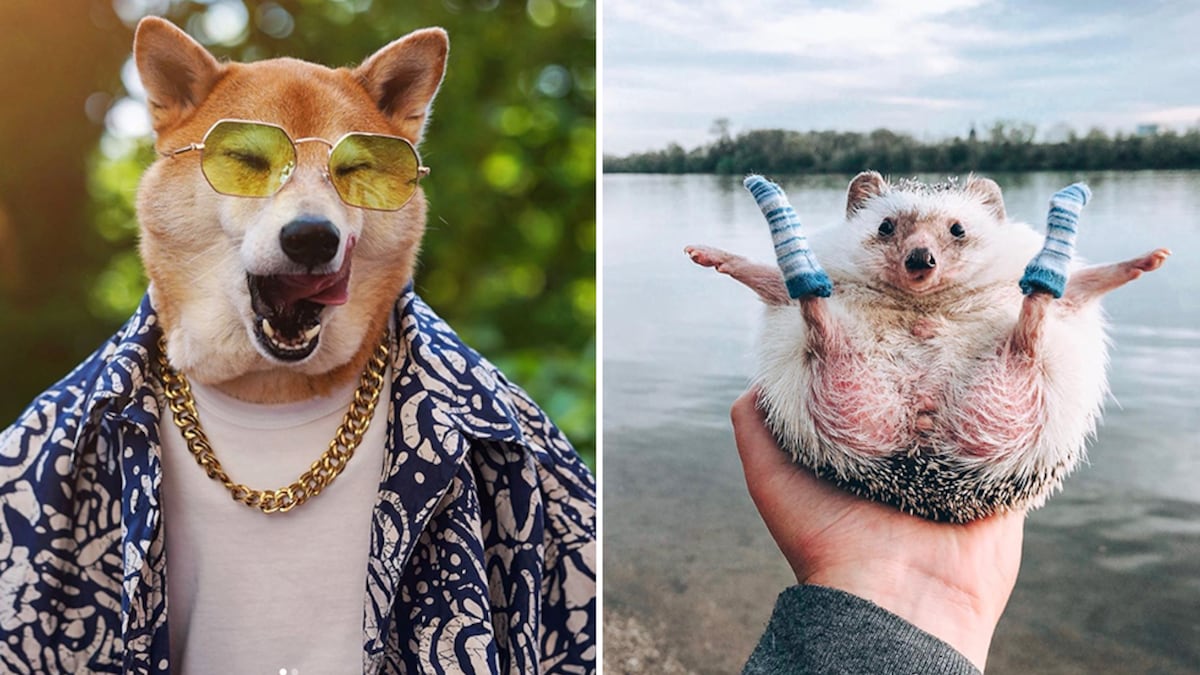 Wild animals and exotic animals have no place in living rooms or on Instagram. These include, for example, hedgehogs, monkeys, foxes, and exotic species of cats.
The trade-in of these animal species is particularly cruel: Many animals are caught in the wild and the majority of them die during transport. Until the animals are bought, they are kept in cages in captivity and often suffer from housing-related diseases.

People who let pet-fluencers buy such animal support this cruel and cruel business. The animals can easily be bought by clicking on the Internet or on animal fairs – even if the buyer is not properly informed about the animals’ needs.
The victims are always the animals.
Please take a close look at who you follow on Instagram and which accounts you support with your likes, comments, and shares!

And I mean…Influencers were yesterday – now the age of pet-fluencers has dawned.

Animals speak to our emotions – and the advertising industry knows that too.

Jiffpom’s earnings don’t reveal owners, but an estimate by UK personal finance website Lovemoney could make Jiffpom over $ 150,000 per post.
The social media analysis tool from InfluencerDB, on the other hand, rates a post by the dog at an average of at least 45,000 US dollars in media value.

Unlike human models, “pet-fluencers”  don’t have to be flawless to be successful.

On the contrary: Often it is precisely flaws such as overbites, flat snouts, deformed legs, sail ears, and bulging eyes that make an animal known. Especially animals with striking, supposedly cute blemishes, often from torture breeding.

These include e.g. French bulldogs, pugs, and short-legged cats. Those who present these animals on social media and stage them as “stars”, in turn, encourage other people to purchase such an animal themselves – and help support torture breeding.

A kind of animal abuse has been reached when you humanize animals when you disguise them and do that for amusement.
In many cases, torture breeding and comparatively ugly animals are successful on Instagram. These animals suffer from protruding teeth or staring, they have trouble breathing and they cannot chew normally.

And yet the success with the followers makes the advertising medium so sought after that an entire branch of agencies and consultants has established itself.

Animal suffering doesn’t always have to be obvious.

Always take a close look – also on the Internet and social media.

Be critical! And weigh up for yourself: Where does animal suffering or cruelty begin for you, what is ethically justifiable?
Always remember: animals have feelings too.

They feel pain, shame, and grief like us humans – and they have a right to their dignity.

In whatever form: Animal suffering is neither “cute” nor “cool”, but a terrible condition for those who have to endure it.