This is how we deal with animals that exist only because of us, that we have made our own, but that are therefore also entrusted to us.

When the self-created situation gets out of hand, we dig trenches and kill entire populations.

We even have our own term for it: “Culling”, says Wikipedia, “describes the precautionary killing of animals, usually to prevent the spread of animal diseases.”

China, Denmark, the Netherlands, Germany … we fed the whole world with graves.
We give kill commands everywhere. 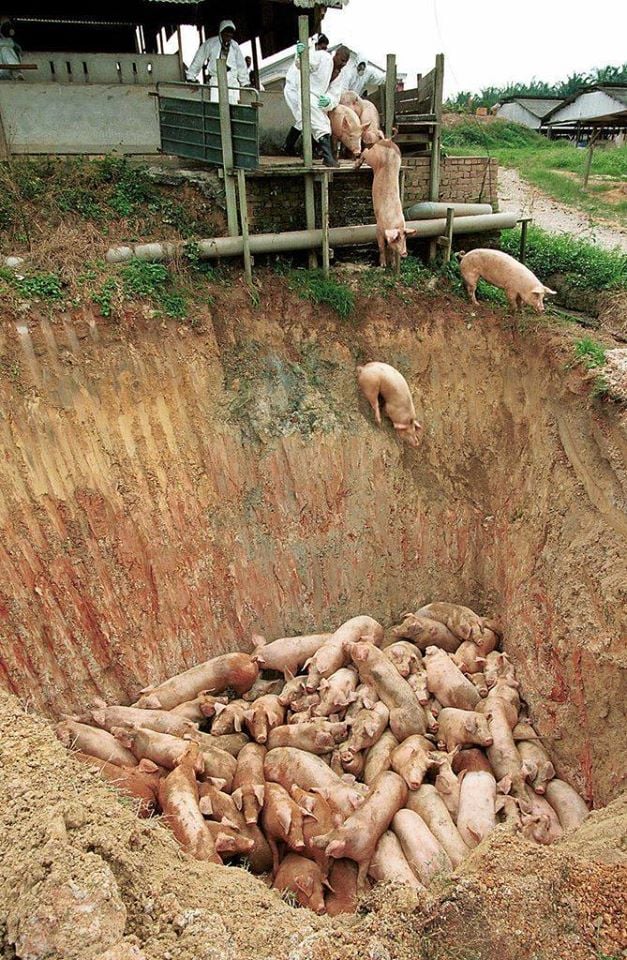 It is us, the people, who made the animals sick. And again the animals have to die for it.

Yes, you can learn to kill. Every war, every terror, proves this.

Such system structures are not normal they can be described as psychopathic. Mentally, morally, socially healthy people with decency do not need such disgusting, exploitative system structures.

But maybe this time the whole animal cruelty industry will go up in smoke.
Thanks to Corona, swine-chicken-cattle flu..and others, which come

And maybe here the circle closes in a particularly macabre way and now we ourselves are drawn into the pit of the others.
This brings us at last to the truth of what Pythagoras said: “Everything that humans do to animals comes back to humans”

The question must be, why should we in the developed western countries NOT immediately start to behave ethically correct towards animals and start a plant-based way of life?
Instead of a radical rethinking, we find ourselves again in medieval thought structures that continue to turn us into criminals.

Veganism is a promising way to save us from a coming disaster and not to be criminals against animals anymore.

As long as we slow down rapid and radical changes out of fear of the future or system conformity, we have exactly the same chances of survival that the dinosaurs had after the great meteorite impact: none at all.

We will definitely fail if we continue as before.