Today I make an exception, and talk about a personal experience with an animal  sanctuary  in France, which I visited a few days ago.

A friend activist asked me if I would like to go to the “open-door day” of the sanctuary farm “Papillon”, in France.

He was often there, but I did not know the farm.

My first thought was: Sanctuary for animals … well! a lot of animal suffering. But I wanted to go.
When I arrived at noon, the yard was already full. 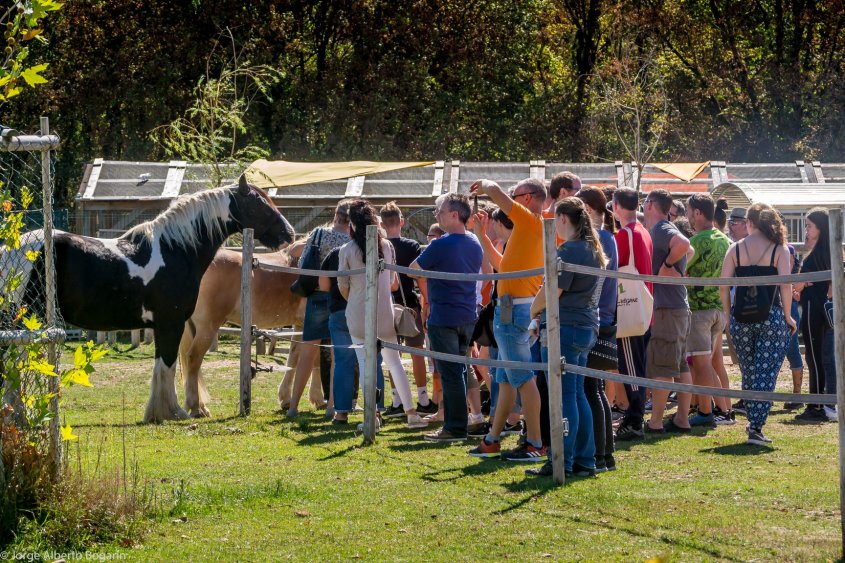 A happy crowd of people of all ages enjoyed the delicious vegan buffets under the mild sun, and used every opportunity to exchange love greetings with the farm animals.
It was a very open and familiar atmosphere.
The entire team of “Papilion”, led from the Swiss couple Olivier and Rebecca Bieli, is doing a great job! Together with their shelter in Romania and the Swiss Dog and Cat Rescue (SHKR)  it has become a life’s work.

The animals have space, loving care, and medical control that goes above average.
The “Papillon” is in France, in Alsace (Munchhouse) on the borders with Switzerland and despite its young age has made a name and is already quite well known, even up to Germany. 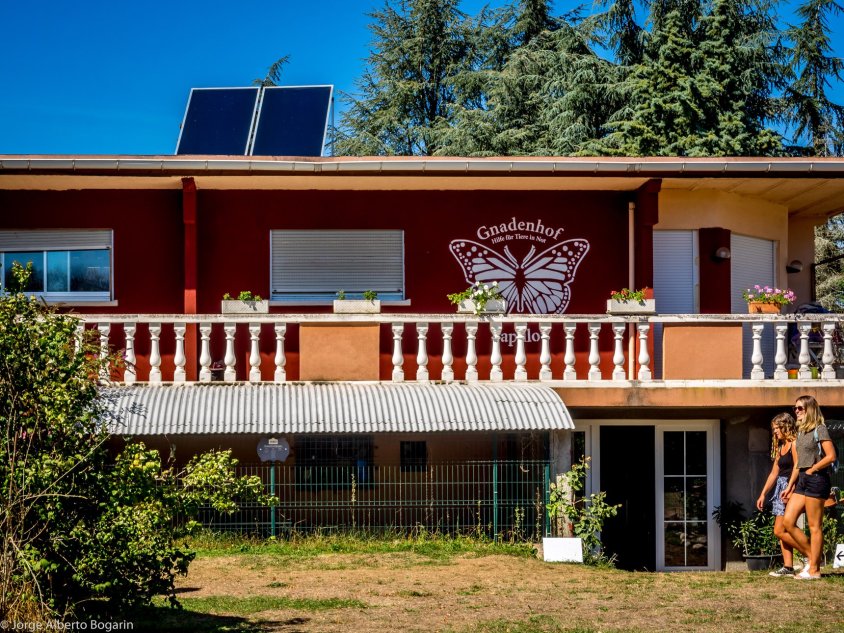 It provides lifelong protection to animals that have already bad experiences with us, and also serves to show the visitors the importance of the work for animal welfare.

They have a fantastic nature environment in which one might self want to live …
I spent three full hours in front of the meadow with the horses, and did not want to leave. It was a pleasure for my eyes to experience satisfied, well-groomed and humane animals (and animal-friendly people).
I found out from the guide that there are animals that are unique specimens because they were bred so extra, and therefore were condemned to suffering. The smallest cock in the world, which should look cute and doll-like, so that it can be sold. He lives there now.

The pigs, which instead of 18 ribs (which is normal) were only bred at 16, so they are easier to sell as small objects.
The Canadian Schwann, who was cleaned up sick and injured and now can not fly, but lives happily with his conspecifics.
And there are also rabbits from fattening, and pigeons and sheep that were planned for slaughter …. 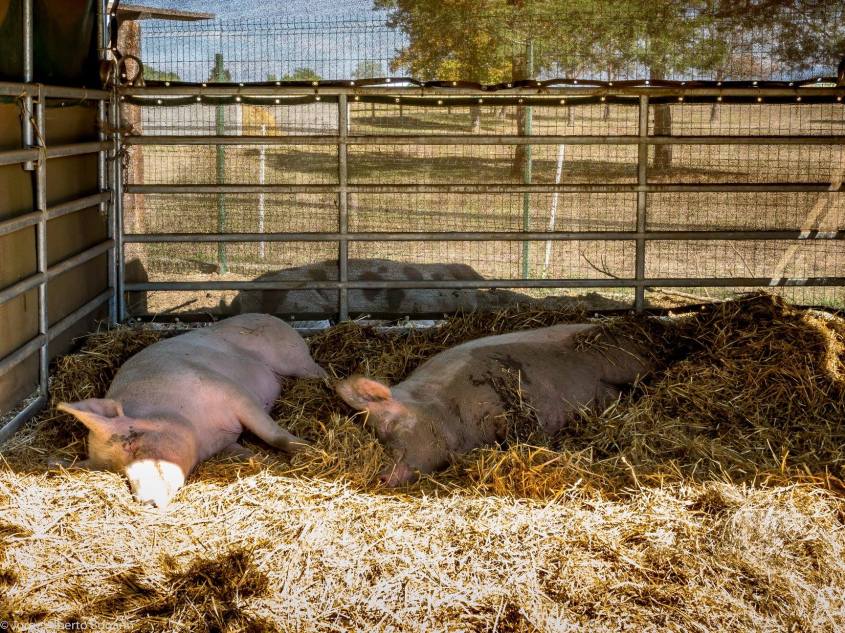 The little dog with the two legs and the rollator, from Romania, who was paralyzed after an accident, might not live without the sanctuary farm.
And although the operators have their profession, always find the time to provide the farm animals lovingly and conscientiously. Each animal is called by name, and Olivier tells the story of each one.

Those who live in this area, Switzerland or France but also southern Germany, would absolutely have to visit this farm; they will spend a nice day with happy and non-suffering animals.
And so they can determine for themselves how much commitment, work and love is invested for the animals, so that they should really have a peaceful and dignified retirement.

But also what educational work the operators make at the visitor tours!! 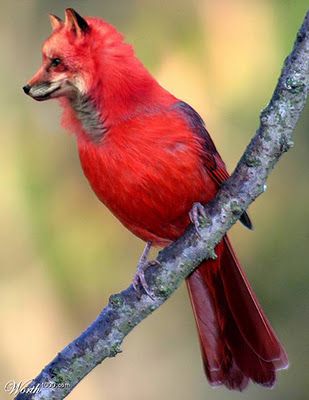 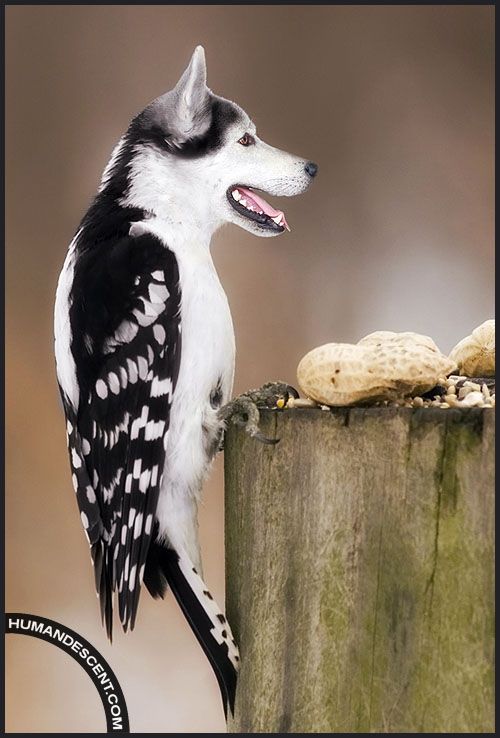 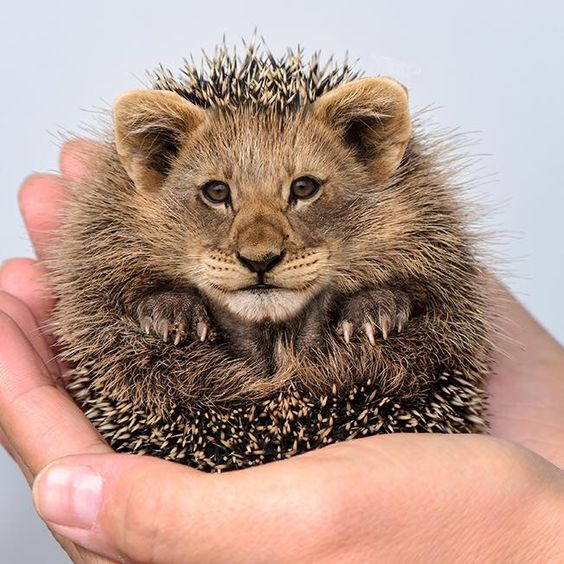 The bull “Ferdinand” saves himself with a jump into the Black Sea before the slaughter – and swam 25 kilometers. Now he is a star and can live on! 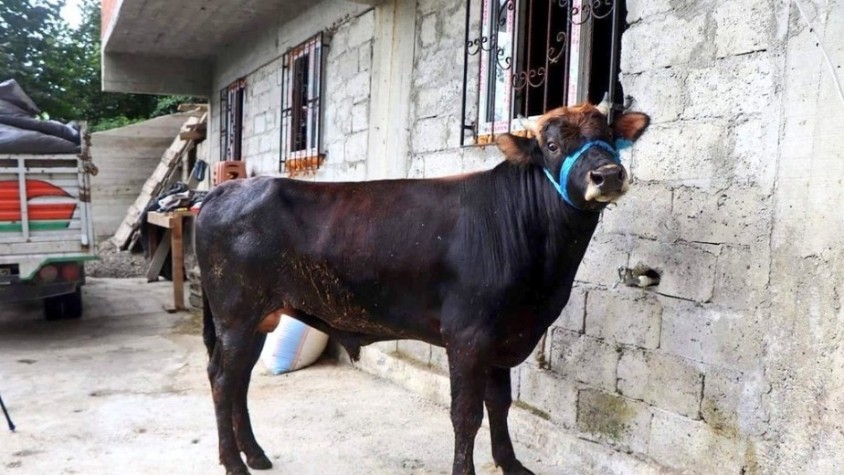 Does not look like a good swimmer, but is one: the bull Ferdinand!

Abdurrahman Köksal could not believe his eyes. The fisherman on the Turkish Black Sea coast was on his boat when he noticed a dark figure in the water. Maybe a swimmer or a diver in trouble, Köksal thought.
He headed for the apparition. But then he saw a bull in front of him paddling off the coast, his nose just above the surface of the water.

END_OF_DOCUMENT_TOKEN_TO_BE_REPLACED

We’ve all experienced the sickening sight of a dead animal on the side of the road. Deer, opossums, raccoons, and even bears are just not evolved to avoid vehicles. Our human need for speed causes countless deaths. But there are some major efforts out there to cut back on these tragic occurrences. Overpasses and underpasses are being built on highways across the U.S. to give safe passage to animals.

Interstate 90 in Washington State passes through the Cascade Mountains, some of the wildest places in the country. Elk, deer, moose, wolves, and grizzly reside in the area and too many come into contact with the interstate and cars that speed by at 70 miles per hour. The four lanes don’t just endanger animals that happen to be in the area; they also cut through major north-south migration routes.

But thanks to a collaboration of conservationists, government, and citizens, the I-90 Snoqualmie Pass East Project has become the biggest wildlife crossing project in North America and a model for other animal crossing projects.

After a number of bridges and tunnels were built across U.S. Hwy 93 in Arizona, incidents of vehicles hitting bighorn sheep went down to almost zero. Fences along the highway funnel the animals towards the bridges and allow them to safely roam a larger territory. In addressing the issue for sheep, other animals benefited like coyotes, tortoises, foxes, and most likely others that leave no trace of their passing.

Today, fewer than 4,000 tigers remain in the wild, but as many as 8,000 are still being held captive across China, Laos, Thailand, and Vietnam.

Some of these tiger facilities across Asia are licensed by national governments and are open to the public. Many are promoted and marketed as zoos, conservation centers, or tourist entertainment venues. But most are basically factory farms, speed-breeding tigers like livestock to satisfy mainly Chinese and Vietnamese demand for their body parts. The rest are small-scale basement or backyard breeding mills existing outside the law.

According to The National Geographic,the tiger breeding industry is still rampant throughout Asia and it’s fueling the illegal wildlife trade. Captive-bred tigers slip into the illegal international trade and feed a growing demand for tiger products, primarily in China. Especially popular are tiger pelts, which are used in luxury home decor, and their bones, an ingredient in expensive tiger-bone wine. This high-end market places a huge price tag on the head of every remaining tiger, and the wild populations are being decimated. 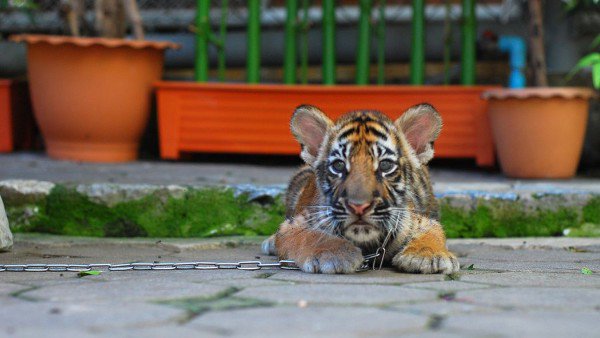 The commercial international trade in tigers and their parts has been banned since 1987 after a vote by CITES, an international treaty regulating the wildlife trade. In 2007, the CITES parties approved a measure stating that tigers shouldn’t be bred for trade either. Yet captive tigers are increasingly showing up alongside wild tigers on the illegal wildlife market.

Captive tiger breeding is a huge problem throughout Asia, but particularly in Thailand. These animals are being bred to fuel the cruel wildlife tourism and traditional medicine industries. At wildlife tourist attractions in Thailand, the baby tigers spend their lives being used and exploited as photo props for tourist selfies. When they are no longer cute or become too difficult to control, the tigers are then killed to meet the demand for traditional Asian medicine.

World Animal Protection is now urging Thailand authorities to enforce a ban on captive tiger breeding by 2020. The hope is that without captive breeding, fewer tigers will become victims of this horrific cycle of exploitation and abuse. Tigers are wildlife and all wild animals belong in the wild, but unfortunately the tiger cubs bred in captivity will never get to live in their natural environment. 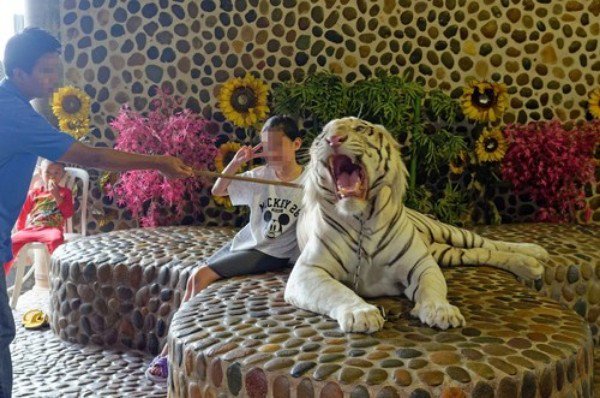 Just like all animals suffering in the tourism industry, captive-bred cubs at tourist attractions endure immense cruelty. They’re kept in barren enclosures, with limited access to fresh food and water. Baby animals in tourism are cruelly trained, chained, and forced to frequently interact with visitors. They are forced to take selfies with tourists all day long, while loud noises and constant camera flashes surround them.

An official ban on captive tiger breeding from Thailand authorities would be a significant step in the right direction, since captive breeding continues to fuel the abusive tourism industry. Any captive animal that is being forced to perform tricks or take selfies with tourists is suffering immense abuse behind-the-scenes. And when they are not cute anymore, their future becomes even more grim. Ongoing investigations are still finding that many tigers in tourism end up killed for their body parts, used in traditional medicine and as home decorations.