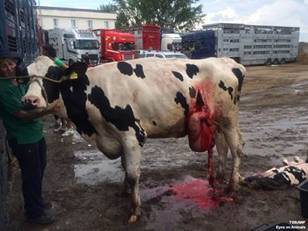 Well this morning – 20/9/18; we are now being informed that the EU leaders; led by un elected Donald Tusk and Jean Claude Alcoholic are still refusing to do any deal with the UK regarding the UK leaving the EU; which will be next March.  The EU still obviously wants to punish the UK, as it always has done; for voting to leave the ‘club’; a deliberate attempt as it always has been to discourage other EU member states for daring to even think about voting leave and get out of this monolith.

In a (UK) national referendum held over 2 years ago; the British people voted to leave the EU.  Why ? – there are many major issues; but let us focus on just one that we have had concerns about for many years – live animal transport.

When you look at the Europa web site regarding live animal transport; everything seems so perfect.  The EU claims to be oh so perfect.  Legislation is in place throughout the EU in the form of Regulkation 1/2005; so why is it being questioned about non compliance ?

As we have shown and said many times over the years on our ‘Serbian Animal Voice’ site; the whole issue of live animal transport across the EU can only be described as a pathetic joke which enforces untold suffering on thousands of animals.  The bigwigs of Europe want to make money from live exports; but in turn they do nothing to enforce the regulations.  And our MEPs; yes our so called Members of the European Parliament; who almost every day sit in the great monolith of Brussels and together decide that really, nothing can be done on the issue of live animal transport.  So what have we elected them into the Europarliament for ? – representing the people and their wishes ? – no not really.  Playing the EU game and ensuring that issues such as live transport; which means so much to many throughout Europe is continually ignored and not acted on ? – well yes.

Have a look at some of our past posts on this:

We strongly suggest that the harrowing video made by friends Lesley and others at EoA in the Netherlands is viewed first –  https://www.youtube.com/watch?v=udReHkAumrY&feature=youtu.be

– this is the actual reality of EU live animal transport; and shows how the rules; EU rules, in the guise of Regulation 1/2005, are NOT being enforced.

The above are just some of our work regarding live animal transportation; there is more.

So; it kind of sticks in many British peoples throats when we see un elected Tusk and Jean Claude Alcoholic standing in Brussels every day and dismissing all efforts by the UK government to get a decent divorce with the EU.  As we show above; if the EU leaders did actually enforce existing EU legislation; such as that on animal transport; then we as EU citizens (for the time being anyway) may have a tad more respect for them.  But they cannot enforce their own regulations; or really care about them; and then they go on a witchhunt to try and say how terrible the UK is !

The UK, as the second largest financial contributor to the EU (is this why they don’t want us to go and will do everything they can to stop us ?) and does abide by EU legislation on nearly everything.  The UK is a good nation when it comes to playing by the often pathetic EU rules and paying our way.  Can the same be said for some other EU member states and those waiting as ‘Candidate countries’ such as Serbia ? – we have exposed all their non compliances with the rule of law (Copenhagen Criteria) over the years and we have provided endless amounts of data to the EU Enlargement Commission to say that the rule of law is not being adhered to in Serbia.  What have we had in return ? – no responses from the EU (as expected) – a system which regards itself above us and the law; the almighty one could say; almighty balls up, we would say.

So over the last 2 years since the vote to leave, the EU hits out at the UK; doing everything; literally everything; to make threats to the UK to frighten it that leaving would be such a terrible thing.  Is the reality in fact the EU is scared that the UK is going to make a real positive move when it breaks free from the shackles of the EU; something which may show other existing (EU) member states that in reality; they will be better off away from the ‘super state’ mentality and vision that we see from Tusk and Junker. 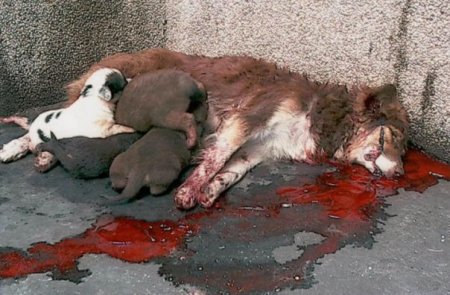 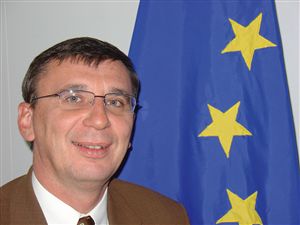 Above – “I can do nothing” Mr Van Goethem proudly displays the EU flag, which yes, does nothing.

As the UK Prime Minister has said; when it comes to a divorce from the EU; the UK may be better off with no deal rather than a bad one from the EU.  Our advice now to PM May; get out and walk away from the continuing bully boy tactics that we as a nation have endured from the EU for the last 2 years or more.  Strange how our MEPs have often remained so silent about all this; certainly those in South East England.  Maybe they are hoping that the day comes when the UK decides to get back in the monolithic club so that they can continue to be representatives of British EU citizens whilst not really getting that involved with specific issues that concern them – ie live animal transport.

When the UK walks out of the EU next March, the abuse of EU animals throughout Europe will not stop; no one says it will; UK welfare campaigners fully accept that.  But by walking away, the UK should at least be able to take back control of its own national issues; free from the crap that is the EU.  Organisations such as EoA, CIWF and many others will continue to present hard, real evidence that live animal transport in the EU simply does not work.  Via the MEP / Parliament system that the monolith employs; there will continue to be no real votes for any hard hitting drastic change to make things better for the animals.  It will be post Brexit, very much the Status Quo with regard issues within the EU.  As long as everyone at the EU is being paid their salary for doing what ?, why should we expect change ?

Europe is heading for a superstate type system; where the normal man and women have no real voice; just like now; and the voices of change come only from Amazon, BMW, and others who have massive influence in many ways over the masters of the universe.  Does Europe make sure they pay their taxes like Mr and Mrs EU citizen ? – of course not; alcoholic Junker has seen to that in the past:

Does he give tax saving incentives to the likes of animal welfare organisations ? – of course not; he wants to see them die along with the livestock that he allows to be abused throughout the EU each and every day.  Gains for Junker; gains for the EU; a system that does not listen to the people; threats to those who wish to leave this farce – how very typical.  And this is the man in charge of the EU ! – no wonder the entire system is progressing in just a few money making directions.

The coming months will see the results of the UK Brexit / EU standoff.  But just one thing to remember; the UK has faced some hard challenges in the past – two World Wars, the Blitz, IRA bombings and killings for many decades; so a pair of chuckle brothers such as Junker and Tusk are seen by the British people for what they are – pissed up self importants who are probably corrupt to the hilt.

Do we want to suck up to them and the ideology that Europe is happy and all smiles in the system ? – no, we do not want.  The sooner we walk away from the chuckle brothers the better –  then we will really see how brilliant they are ! 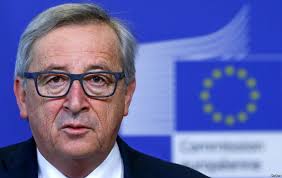 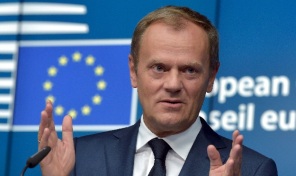 Junker and Tusk – the ‘Gods’ of Europe.

Regards to all – Dogs Mouth 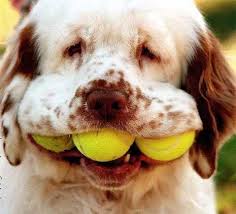