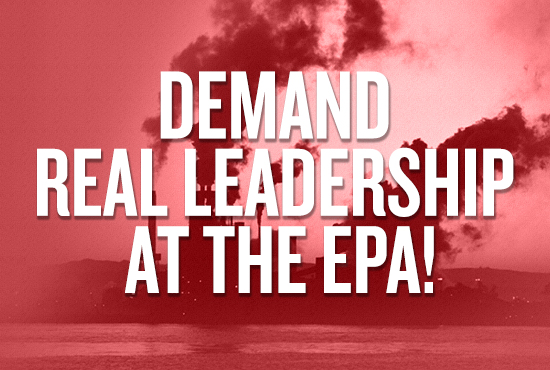 Demand Real Leadership at the EPA

Bill Wehrum—assistant administrator of the U.S. Environmental Protection Agency and the architect of President Trump’s unconscionable attacks on clean air and climate regulations—has resigned. Wehrum oversaw efforts to roll back safeguards that limit air pollution and attempted to dismantle the landmark Clean Power Plan. Now is the time for the public to mobilize and tell the EPA’s leaders to start upholding the agency’s mission of protecting the American people and our environment.

Wehrum, along with EPA Administrator Andrew Wheeler, is responsible for attempting to dismantle many lifesaving protections for our environment and health, including EPA’s clean car standards and the Clean Power Plan, our two most important federal efforts to reduce carbon emissions in the US.

This is a critical moment for the EPA — and our best chance to mobilize a massive public outcry demanding real leadership at the agency.

Take action now: Tell Trump and the EPA to reverse course and fulfill its mission to defend the fundamental regulations that protect our environment, our health, and our climate.

The request of the Social Democratic Party of Austria (SPÖ) finds a majority, the consequence: In Austria comes a glyphosate ban.

The dangerous weed killer must not be sold in the future.

Glyphosate is the world’s most used weedkiller. It has been used in agriculture, industry, horticulture and private households since the mid-1970s. Monsanto sells the herbicide under the name “Roundup” and has been making billions in sales since the 1970s. No wonder then that Monsanto lobbyists claim that glyphosate is so harmless that it can even be safely drunk!!!

In three separate cases, they have ruled that the glyphosate drug Roundup from Bayer subsidiary Monsanto is a “significant factor” in the onset of the cancer.

A Californian court last ordered Monsanto to pay $ 250 million in damages to a cancer patient in August 2018. He blamed the plant poison glyphosate for his cancer – and the jury proved him right.

Among other things, because during the negotiation of emails came to the language, which weigh heavily on the company.
ÖVP (Austrian People’s Party) and FPÖ (Freedom Party of Austria) were already in the European Parliament against glyphosate ban.

On 12 June 2019, the parliament adopted a so-called deadline application by the SPÖ for the majority of the ban. The Freedom Party had signaled to agree to the total ban on the plant poison. Until the end, however, it was unclear whether the libertarians actually agree. On 2 July 2019, the Socialist Party finally pushed for a ban.

The People’s Party is still against it. It wants agriculture and forestry to be exempted from the ban – although this sector is responsible for 80 percent of pesticide use.

My comment: Congratulations Austria!
Good decision. Finally, a country has the courage to go against the lobby of the Bayer Group.
Here in Germany, we are still sleeping and, as always, we remain groundlessly optimistic about the future of our planet and in solidarity with the decisions of the Monsanto / Bayer lobbyists, also known as the EU – Commission!
Let’s hope that we will soon come to such a progressive decision as the Austrians.

Animal-loving holidaymakers may think there’s nothing wrong with getting close to nature on eco-tourism trips, but the truth can be very different

Now summer holiday season is officially upon us, eco-tourism companies around the world are preparing to receive millions of nature-loving Brits hoping to interact with wild animals in their own environments.

Most responsible travellers wouldn’t dream of going to see blatantly cruel bear baiting or an orangutan boxing match while abroad, or even visit an animal circus or zoo because of concerns over animal welfare.

But many would be quite happy to visit a tiger sanctuary, swim with dolphins or ride an elephant through the jungle.

Here are some which animal welfare groups are urging holidaymakers to avoid.

For those who are against seeing a caged tiger in a zoo, experiencing them in a so-called tiger sanctuary might seem reasonable.

But the word ‘sanctuary’ is often grossly misleading, especially in countries like Thailand where tourists can also sit with a tiger and pose for a photo.

In order to keep the animals docile for the tourists, the tigers are chained to the ground and pumped with sedatives.

And to keep them safe for the tiger selfies, the big cats also often have their teeth and claws removed and even the tendons in their wrists cut they they are unable to swat or run.

This has become a beloved past-time for animal lovers who would never dream of going to see whales perform in captivity.

Boats often chase down the animals to get a better look, resulting in many hitting and seriously injuring the whales.

The noises caused by engines can also disrupt mating routines and drive the whales away from feeding areas.

If you want to see whales in the wild, ask the tour company about their whale watching codes.

A responsible company will state that the won’t chase the whales, but rather anchor off at a safe distance to observe the whales without disturbing them.

Riding atop an elephant – and posting the obligatory photo on social media – is an experience many people dream about when planning a holiday to Southeast Asia.

But most tourists have no idea that they are only able to ride them because the elephant was brutally tortured to breaking point when it was still a baby.

Baby elephants are ripped away from their mother by poachers, then confined to a very small space, like a cage or hole in the ground, and beaten with clubs, pierced with sharp bull-hooks, and simultaneously starved and deprived of sleep until they become submissive.

The process is called Phajaan, or ’the crush’ by captors.

After the elephant has been “crushed” they’re taught to perform tricks like ‘painting’ pictures, dancing or playing piano, or to accept human riders, whose weight eventually causes back and joint problems and a premature death.

Another bucketlist favourite for animal lovers, dolphin swims are common in places like the Caribbean.

The experience is also popular among tourists to the Amazon, who can get in the water with the freshwater ‘boto’ dolphin.

But animal groups warn people to think twice before signing up to swimming with dolphins, even in the wild.

Research has found that swimming close to bottlenose dolphins can be highly stressful for the aquatic creatures, preventing them from resting, feeding or nurturing their young.

Lori Marino, a neuroscientist at Emory university in Atlanta, said they could suffer “psychological problems” stemming from swimming with tourists.

And there is also the risk of transmitting diseases between humans and dolphins.

Lion sanctuaries raise lions from birth and offer tourists the cuddle and take selfies with the cute, fluffy cubs.

But while visitors might think they are helping the centres to breed the majestic animals, many don’t know that the cubs they are handling are destined to become a hunter’s wall mount.

One the lions have reached maturity, they are sold to big game hunters, who trap the animals in an enclosed area and spend hours following them before shooting them dead for entertainment.

Because the lions have spent their lives accustomed to positive interactions with tourists, they are less wary of people and are easier to hunt.

Horse lovers on holiday to Europe may consider going to see a horse arts show popular in countries like France and Portugal.

But many shows can be incredibly cruel for the horses.

In many cases the animals have been trained to perform using electric shocks to their anuses.

The horses are also forced into positions that are highly unnatural for their physiology, such as bowing and doing a curtsey.

And the shows often end with a fireworks display, the noises of which can frighten these sensitive animals.