The slaughter is coming.

Dogs in South Korea are about to be hanged, beaten and burned alive as the first of the horrifying Boknal “dog eating days” is slated to begin on July 12.

Time is running out. Sign the petition now urging Korea to outlaw the barbaric dog and cat meat trade and put an end to the cruel “dog eating days” of summer, when more than a million dogs face torture and death.

Thanks to your voices, along with global media and activist outcry, dog farms and slaughterhouses are closing across Korea. But we must not stop until the horrific industry is shut down completely!

We are closer than ever to making dog and cat meat a thing of the past.

please sign the petition to bring us that much closer.

Petitions DO work – voices against the trade are now being heard.  Finally nations that abuse dogs are now getting the message – unacceptable !  – Positive news.

JAKARTA – Indonesia’s Regency of Karanganyar in Java has pledged an action plan to end its brutal dog meat trade, following a shocking investigation by campaign coalition Dog Meat Free Indonesia. The action plan includes closing all 21 stalls selling dog meat in the regency and the creation of alternative livelihoods for those people currently reliant on the trade. The local government plans to host a meeting with the traders and vendors to announce the ban and to discuss alternative livelihood opportunities, a first of its kind in Java.

The Dog Meat-Free Indonesia (DMFI) coalition’s investigations showed dogs being beaten and strung upside down to bleed out whilst still conscious, and in full view of other terrified dogs bound and caged who await their turn. The horrific footage prompted renewed calls for urgent action by campaigners, national and international celebrity ambassadors and concerned citizens from throughout Indonesia and around the world. The action being taken in Karanganyar will save almost 2,000 dogs each month from slaughter, and campaigners are optimistic that this will mark the start of a nationwide movement to tackle this illegal and dangerous trade.

When announcing the development of an action plan Regent of Karanganyar Regency Drs. Juliyatmono denounced the trade, warning of the grave risks to public health it poses. Whilst dog meat is consumed by some for its perceived health properties, the reality is that the dog meat trade poses a significant and very real threat to public health, with rabies transmission being of particularly grave concern. Research shows that the highest prevalence of rabies occurs in provinces and regencies with the highest dog meat consumption., bringing with it devastating consequences for human health, animal welfare and the local economy.

As an ever-growing number of countries and territories in the region and around the world take action to tackle the illegal dog and cat meat trades, global public and political communities are becoming increasingly intolerant to the trades. With the recent Indonesian presidential elections having taken place on April 17, campaigners hope that now is the time for the government to prioritise this issue on grounds of public health and safety as well as animal welfare, and fulfill its pledge to take action to tackle the trade.

“In order to prevent various diseases caused by dog meat consumption, we will soon take action to close all dog meat stalls in Karanganyar, so humans can co-exist in harmony with the environment and all living creatures” – Drs. Juliyatmono, M.M, Regent of Karanganyar Regency.

“Pledges for action have been made from the Central government’s Ministry of Agriculture, and the DMFI and the millions of supporters we represent worldwide applaud this position.  But these words need to result in commitments for change through strong and impactful actions, like those presented by Drs. Juliyatmono, M.M.” – Karin Franken, Jakarta Animal Aid Network.

”We congratulate the Regency of Karanganyar for addressing these grave concerns for the sake of public and animal health and safety, and call on those in power to take action nationwide. Promises have been made but we need to see programs to end the trade implemented nationwide to protect our communities and animals. The DMFI coalition stands ready to help provide practical and on-the-ground support to secure the dual aims of eliminating both the dog and cat meat trades and rabies” – Angelina Pane, Animal Friends Jogja.

“Now is the time for the Indonesian Central and Provincial governments to take Karanganyar Regency’s lead and to prioritise this issue on grounds of public health and safety as well as animal welfare, and fulfill their pledge to take action to tackle the trade. The trade is cruel and dangerous, and the time is now for action to be taken!” – Lola Webber, Change for Animals Foundation. 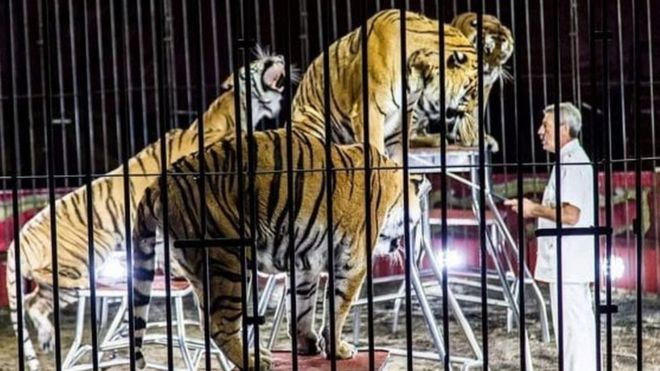 Tigers are wild animals which belong in the wild – not servants of people like Weber performing pathetic tricks for the uneducated..

A famous circus animal trainer has died after four of his tigers mauled him to death while he prepared for a show in Italy. 61-year-old Ettore Weber was reportedly killed by the animals at around 7.30pm last night, July 4, at the Circo Ofei – Italy’s most famous circus – near the city of Bari.

It is believed Weber was rehearing for his act when one of the tigers knocked him to the ground, the other three big cats then pounced on him and continued to maul the trainer.

According to La Gazzetta Del Mezzogiorno, the tigers played with Weber’s body for around half an hour after he had died, as stunned medics looked on, unable to do anything. Fellow circus performers reportedly tried to drive the animals away, but to no avail.

Police are now conducting an investigation into the attack, trying to determine the events leading up to the attack and the attack itself.

Authorities at the scene say Weber suffered a number of serious injuries, including severe trauma to his spine. 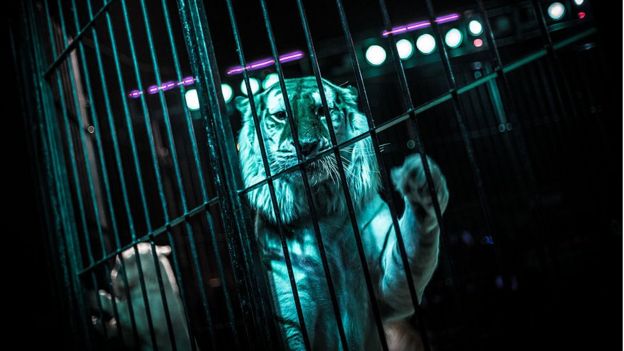 Four tigers have mauled their trainer to death during a rehearsal at a circus in southern Italy.

One tiger set upon Ettore Weber, 61, on Thursday evening in Triggiano, near Bari, before the other three joined in.

They then played with his body in their cage until paramedics and circus staff intervened, local media report. He later died from his injuries.

Mr Weber, who worked with the Orfei Circus, is said to be one of Italy’s best known circus trainers.

He had been training the tigers at about 19:00 local time (17:00 GMT) for a show called Animal Park, which was based on travelling around the world and seeing different animals.

Some 40 countries have partially or fully banned the use of wild animals in circuses, including 20 countries in Europe.

A Tiger in its Correct Environment – the Wild.

Play with fire and in the end you get burned !

It finally looks as if Korean dogs.org are starting to make an impression with all their dedicated and very hard work – congratulations to them !

The new government announcement on a 5 year plan for animal welfare is really great news – we know you will join us in congratulating them on this very positive news.

Click here to read the newsletter in the homepage:

The Korea Bizwire reported on July 3, “South Korea’s agriculture ministry said Wednesday it is drawing up a five-year plan on improving the welfare of animals in the country, which will focus on adopting tougher regulations against animal cruelty and providing them with a better living environment.”

They reported, “Under the 2020-2024 plan which is anticipated to be announced in December, the South Korean government will revise animal-related regulations in different areas from raising pets to carrying out animal tests, according to the Ministry of Agriculture, Food and Rural Affairs. Among others, the government said it will redefine the scope of actions that can be considered as animal cruelty. When implemented, abandoning pets also will be considered an abusive action and violators will face stronger punishment. Any maltreatment that leads to the death of animals may be punishable with a jail term of three years or a fine of 30 million won (US$25,638), up from the current ceiling of two years and 20 million won.”

According to the report, “Breeding farms will be required to provide better living conditions for animals in terms of the size of cages and the number of employees….

The government will also prepare guidelines to cope with stray animals, including making shelters for pets in case of disasters.”

YAY!!! We are so happy the resolution (asking the governments of China, Vietnam, South Korea, Cambodia, and Indonesia to ban the sale of dog meat and to enforce their animal cruelty laws) unanimously passed the City Council today (13 Yes, 0 No, and 2 absent). A big thank you goes out to Mr. Jeffrey Mausner for speaking at the council meeting today and to all the members of the Valley Alliance of Neighborhood Councils for their efforts to make this possible. Also we are grateful to all council members who voted for this important resolution. Click HERE to learn more.

Today is July 1 in South Korea and as of this day, Busan Gupo Livestock (Dog Meat) market is closed for good! Busan Korea Alliance for the Prevention of Cruelty to Animals (Busan KAPCA) has worked very hard for many years to make this happen. They, along with Korea Animal Rights Advocates (KARA) and Korea Animal Welfare Association (KAWA) are right now at the Gupo Market to rescue the remaining dogs.

Busan Gupo Dog Meat Market is the first market in South Korea to close down altogether instead of just banning onsite slaughter. This is a truly momentous time in South Korea’s animal rights history. Many people are here to celebrate the closure of this market and rescue of the remaining dogs that the dog butchers agreed to release. Busan Mayor Oh Keo-Don, Busan Buk-gu District Director Jeong Myeong-Hui and other government representatives, along with many rescue activists/organizations and press, are present for the photo opportunities.

It is hoped that the actions of Busan Gupo Dog Meat Market will create a domino effect and that other major cities with large dog meat markets will follow Busan’s example. There are still hundreds of dog meat restaurants and so-called “Health Food Shops” in Busan that continue to sell dog meat. We must, therefore, keep the pressure on by taking action and protesting until the dog meat industry is completely banned in Busan and all around South Korea.

We are very excited that the New York based animal rights group “The Animals’ Battalion” will be organizing demonstrations in front of the Korean Consulate General’s Office for the fifth year in a row for the 3 days of Boknal (dog eating is traditionalized in Korea – Chobok 7/12, Jungbok 7/22, and Malbok 8/9 (Demonstration is on 8/9 Friday because Malbok 8/11 is on Sunday) in 2019) and EVERYONE IS INVITED. YOU DON’T HAVE TO BE A MEMBER OF THE ANIMALS’ BATTALION. IF YOU CARE ABOUT THE KOREAN DOGS, PLEASE JOIN.

Not in New York? You can still join us from the comfort of your home. Join our Phone Blitz and be the voice for the Korean dogs and cats! All you need is compassion and a phone.

Big congrats to Korean Dogs for all their hard work to tell the world – efforts now paying off.