But there is no reason to celebrate: Tigers are hunted mercilessly by poachers,  these beautiful big cats are among the endangered species. In addition, the palm oil industry, which is responsible for clearing forests, has catastrophic consequences for the habitat of the tiger and for the worldwide biodiversity. 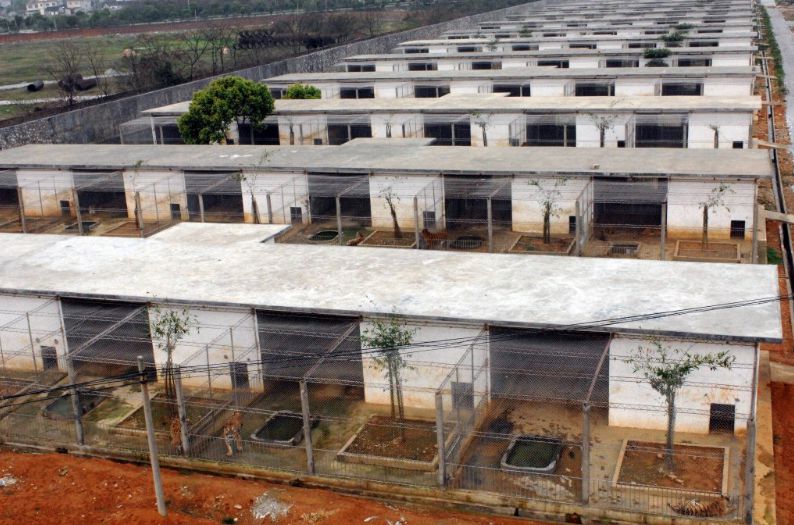 Tigers are threatened with extinction. The world has already lost over 90 percent of its tiger population, because there are only about 3,900 of the animals in the wild.
In 2010, there were still an estimated 3,200 tigers in the wild in 13 states of Asia.

One hundred years ago there were more than 100,000 animals. Currently only five subspecies live, three are already extinct and one has not been spotted for decades.

About 20,000 tigers now live in captivity, most of them in zoos, tiger farms or privately owned. 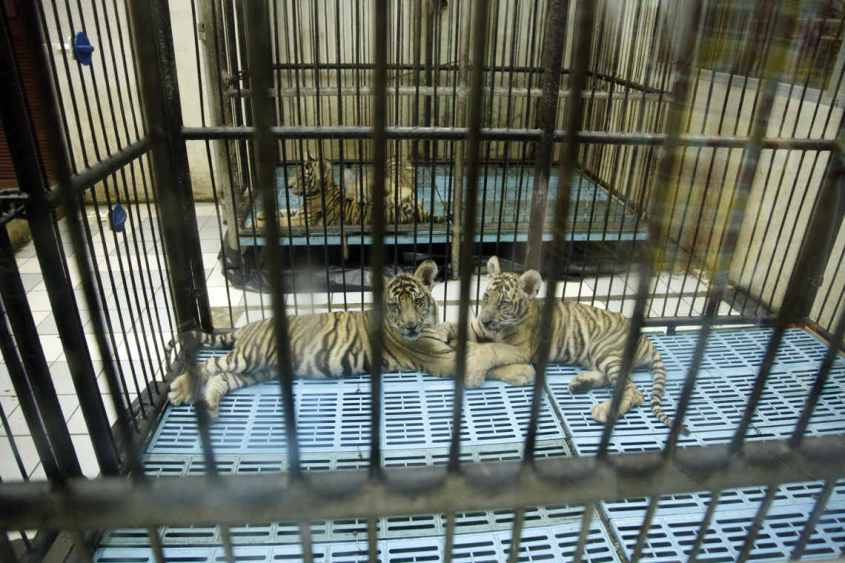 This dramatic decline is the result of a perpetual demand for tigers. Their body parts are marketed and showcased live animals for commercial purposes. The commercial trade in live tigers and tiger products – whether born of the wild or in captivity – must be stopped! Legal trade fuels illegal trafficking and poses a great threat to the last tigers in the wild. 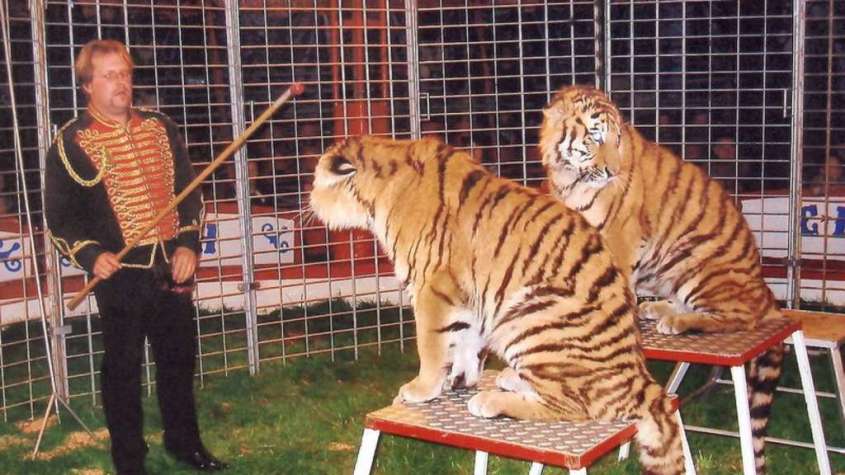 It is shocking that captive-born tigers in Europe are still being traded for commercial purposes such as circuses or private ownership and “tiger selfies”. In some European countries, tigers can even be hired for private parties!

There are no exact figures on tiger population and tiger trade within Europe; Nobody knows how many animals are currently kept in Europe, how often they change owners and for what purpose they are used. Also their end of life remains uncertain, in the worst case they are killed and processed to “Tiger wine” or other traditional medicines. 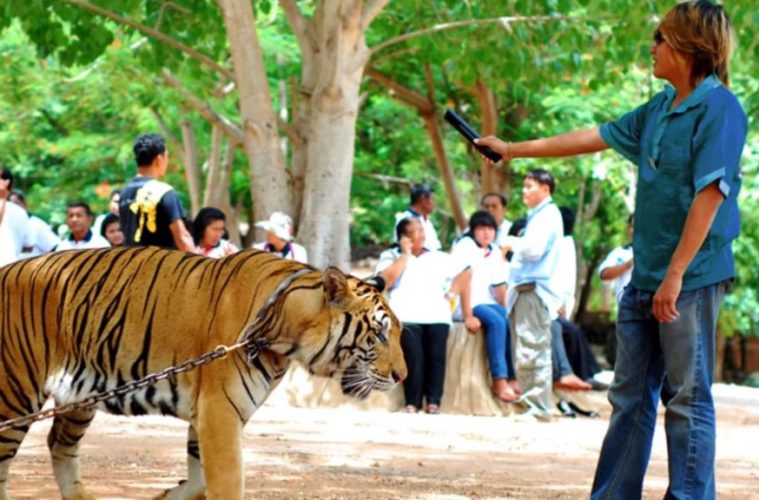 Our investigators have discovered that tiger dealers operating in Europe are ready and able to sell and transport tigers to Asia. In countries where the demand for body parts of tigers for medicine is still associated with massive suffering for the animals and the decline of the wild population. In addition, China wants to allow the use of tiger bones and rhino horn of captive-bred animals in hospitals (!!)

Almost everything that comes from the tiger is considered a valuable ingredient in traditional Chinese medicine. For example, powder from tiger bone should accelerate healing processes, relieve rheumatism and help against malaria (!!!)
On the black market alone, the backbone of a tiger costs up to 700 euros.
China’s economic boom has spawned many new rich people who are now promoting the tiger wine boom due to prosperity. The demand for exotic preparations is increasing rapidly. 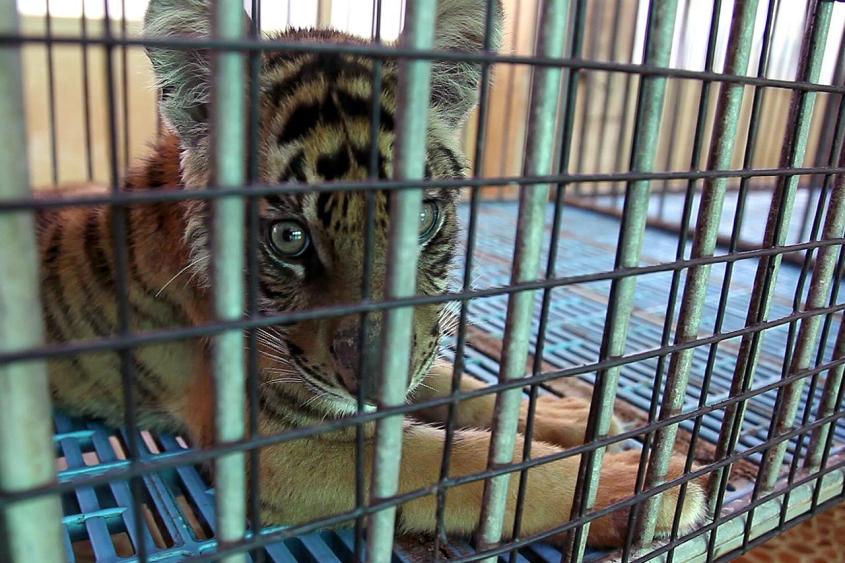 We must stop tiger trade. We can not allow that anymore! Call on the EU Commission to ban the trade in tigers!

Let us finally stop the #RuthlessTrade and together we call on the European Commission to prohibit the unscrupulous trade in tiger ➡️ https://tigerhandel.vier-pfoten.at/

My comment for this day is only a video, from PETA.

Which again proves the sad fact that we, the human animals,  in terms of animal morality still live on the trees!

Want to hear a story about the EU ?

The European Commission should actually be paying us to do the job of being EU inspectors. But desperation is not in our vocabulary, so we work independently. We have been doing this blog since the first day (15/7) of the shipment from Romania, and only with the modest resources that we have available.

It is illegal and ethically unacceptable for a ship with 70,000 live sheep to be at sea since 15 July.

Primarily the biggest disgrace was that no one was able to forbid the ship to depart in the first place.

Commissioner Andriukaitis (below) has failed.

EU countries, as member states, should be forced (policed) to comply with EU animal transport regulations. EU Regulations (1/20005) stipulate that animals can be transported in heat only as long as the temperature in the vehicles does not exceed 30 ° C (with 5 ° C tolerance upwards).

This is stipulated by the Regulation for animal transports over 8 hours journey time.

It has previously docked in Jeddah; and today (29/7) in Jebel Ali which is located in United Arab Emirates.

How many animals are still being carried ? – are they all offloaded at previous ports or are some still aboard and alive ?, what has become of the bodies of those who have died painfully in the past?

Should we wait until they are sighted by tourists and share the beach of Tenerife?

Is not it to be feared that half of the sheep are already dead when they drive around the sea for two full weeks at a temperature of over 40 degrees?

And is not it shameful that none of our highly paid EU Commissioners are worried, how are the sheep going to be disposed of?

Disrespect! Not only towards animals, but also towards the environment, against the law, which is designed by the EU itself to keep everything correct and in check !!.

We at WAV / SAV reported about it.

We were among the 70,000 living beings in this way, that was the least we could do for them, we could not do anything else.

Now we are talking with other animal organisations to approach future campaigns against actions such as this.

In the future, we will often take to the streets.

We are fed up with corruption, indifference, the cheating of people and animals by non-compliant governments and EU oligarchs.

We are many who want to abolish mass animal husbandry and torturous animal transports.

And we will fight hard and consistent for our Animal Companions.

In yet more negative publicity for the controversial theme park, SeaWorld is in the headlines again with two former employees claiming whales at the attraction were habitually drugged and starved to control their behaviour.

According to Ventre, SeaWorld told employees to lie to visitors and tell them that injuries evident on the whales — such as dorsal fin collapse — were normal, rather than, as is believed, due to inactivity and the stress of living in captivity.

He also said that the park forced trainers to tell children that killer whales only live for 25 to 30 years, when in fact they can live up to 80 years in the wild, but frequently die early, at about 17, when captive.

“The job is more akin to a stunt man or clown performing with captive animals using food deprivation as a motivator,” Ventre said.

“The whales and dolphins were stressed and this caused stomach ulcers,” he explained. “So they got meds for that. They also got chronic infections, so they got antibiotics. They were also sometimes aggressive or hard to control so they could be given Valium.”

“I worked with some whales that were on medication every day of their life and have personally watched whales die at very young ages from disease,” added Hargrove.

The trainers’ claims of cruelty follow the welcome announcement earlier this month that Virgin Holidays will no longer be selling tickets or packages to attractions that have captive whales or dolphins.