Activists oppose Federer’s sponsorship deal with Credit Suisse over its links to the fossil fuel industry.

Some appeared in court this week after refusing to pay a fine for playing tennis inside Credit Suisse offices in 2018 to highlight Federer’s deal.

Federer did not address the deal directly in his statement.

The activists – most of them students – appeared in court in Renens, Lausanne, on 7 January to appeal against the fine. Some supporters gathered outside holding banners which read: “Credit Suisse is destroying the planet. Roger, do you support them?”

Greta Thunberg – the Swedish teenager who has become the public face of worldwide protests against government policies on climate change – joined the criticism against Federer and Credit Suisse when she retweeted a post from activists 350.org Europe.

Since 2016 @CreditSuisse has provided $57 BILLION to companies looking for new fossil fuel deposits – something that is utterly incompatible with #ClimateAction @RogerFederer do you endorse this? #RogerWakeUpNow pic.twitter.com/ED1fIvb4Cr

The post said loans by Credit Suisse to companies investing in fossil fuels were incompatible with action on climate change and urged Federer to “wake up”.

In his response, the 20-time Grand Slam champion who is in Melbourne for the Australian Open, said: “I take the impacts and threat of climate change very seriously, particularly as my family and I arrive in Australia amidst devastation from the bushfires.”

Federer said he had “a great deal of respect and admiration for the youth climate movement” and was “grateful to young climate activists for pushing us all to examine our behaviours and act on innovative solutions”.

“We owe it to them and ourselves to listen. I appreciate reminders of my responsibility as a private individual, as an athlete and as an entrepreneur, and I’m committed to using this privileged position to dialogue on important issues with my sponsors.”

For its part, Credit Suisse has said it is “seeking to align its loan portfolios with the objectives of the Paris Agreement [to combat climate change] and has recently announced in the context of its global climate strategy that it will no longer invest in new coal-fired power plants”.

Federer is taking part in a fundraising event next Wednesday in aid of relief efforts to address the Australian bushfires which have killed at least 28 people and destroyed thousands of homes since September.

WAV Comment – I (Mark) have been involved a bit in the past regarding Biosecurity issues on transporters carrying livestock. For proper biosecurity – ie to prevent the spread of disease and infection between animals carried at the same time and also at different times, vehicles by law are to be cleaned out (normally with a pressure spray) and fully disinfected before they take on a new consignment.

As this check was undertaken in the West of England, I would guess that maybe Calves have been involved in the shipments. I cannot prove this; just a gut feeling from experience. Cattle get Bovine TB; and this is a typical way that BTB can be spread from one consignment to another. As we have long argued, this is happening – 70% of all livestock vehicles stopped were non-compliant with required regulations – and that is more than worrying; especially when many cattle farmers are blaming the Badgers for spreading BTB amongst herds.

Maybe the farmers need to look at their own practices a bit more closely before they start blaming others. It was described to be ‘three-inches deep in animal dung’

A disgusting trailer full of poo was seized as part of a joint-traffic operation on the M5.

Devon and Cornwall Police, Trading Standards and the DVSA carried out a multi-agency operation targeting farm vehicles travelling to and from the cattle market in Devon yesterday (Saturday, January 11).

Police said the vehicle was an example of “worst practice, poor potential animal welfare” and had red diesel, which resulted in the vehicle being seized.

Devon Live reports how the back of the trailer was said to have a “filthy animal compartment, three-inches deep in animal dung”.

Police say the vehicle also had defective breaks on the trailer and was “found to be using what is believed to be red diesel” and HMRC are investigating.

Rural Affairs Devon added: “This is the second time we’ve deployed Operation Trailer, nine vehicles where issued with prohibitions due to defects, two vehicles were seized for HMRC offences, and 70 per cent of all livestock vehicles stopped were non-compliant with required regulations.

“Please make sure to check your trailer.” 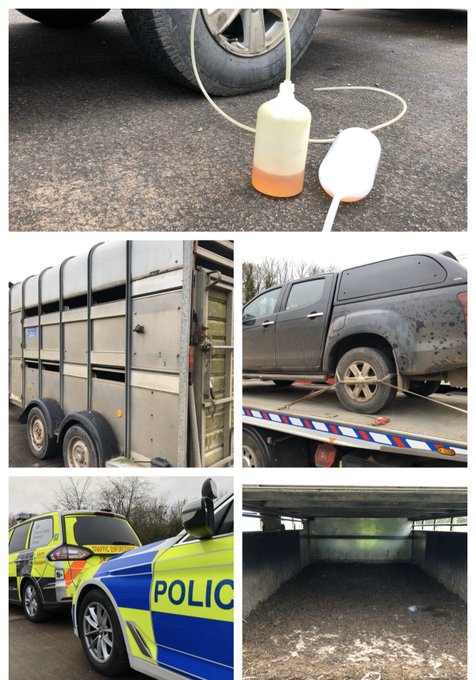