Further to our very recent post and the damage to Australian wildlife due to the need for meat demands –    https://worldanimalsvoice.com/2020/01/27/australia-do-people-care-about-the-other-crisis-killing-koalas-kangaroos-another-very-interesting-view/    – we now look further into a report undertaken by the UK ‘Independent’ newspaper (which we admire for being independent) in conjunction with Greenpeace; and the impact that British meat eaters are having on habitat loss in South America. Being English, I (as a Greenpeace member) do not hesitate to show this as I feel the meat eating Brits are as much to blame for the destruction as anyone else, no matter where they live – Regards Mark 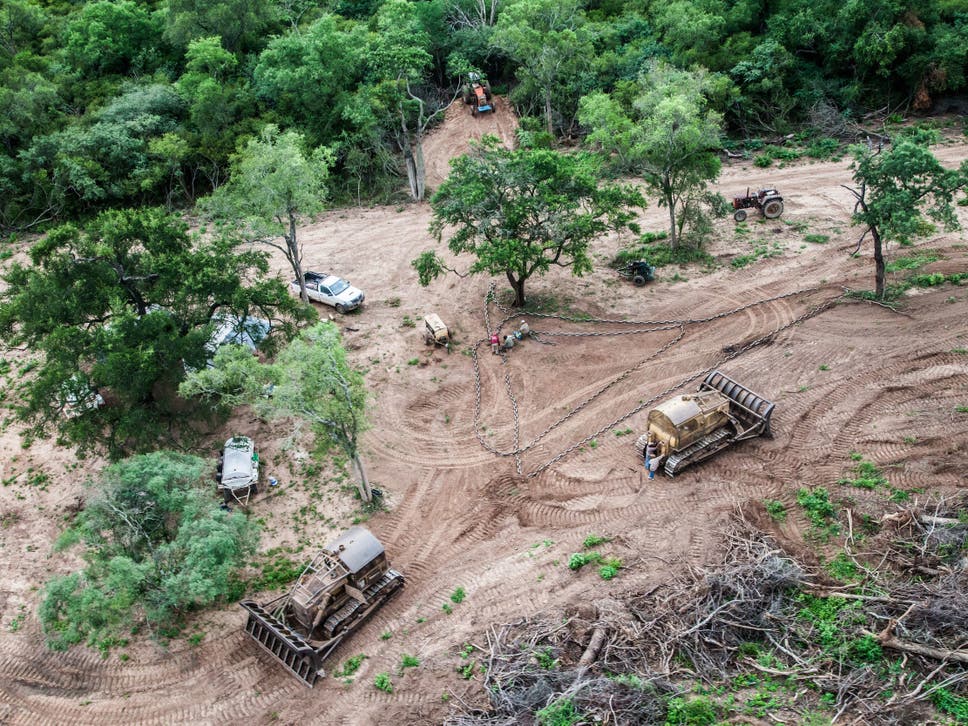 Photo – Illegal logging in Argentina, where forests are being replaced by soya plantations ( Nicolas Villalobos / Greenpeace )

Greenpeace calls for meat-reduction targets by big stores that ‘fail to monitor suppliers’ but run promotions.

The production of chicken to be sold in UK supermarkets, restaurants and fast-food chains is destroying wildlife-rich forests in South America, Greenpeace investigators claim.

Swathes of forest are bulldozed each year to grow soya, which is used to feed poultry in the UK and the rest of the world, a report by the charity says. The land used partly includes the world’s most biodiverse savannah, the Brazilian Cerrado.

South America’s forests are home to rare wildlife species and are a major absorber of damaging greenhouse gases, so eradicating the trees accelerates the climate and biodiversity crises.

But in failing to monitor where their animal-feed crops come from, Britain’s high-street brands are “contributing to the deforestation“ – some of which is illegal, it’s claimed.

Consumers swapping red meat for chicken and other poultry are also fuelling the demand, and supermarkets and fast-food chains are pushing up sales with special offers on chicken, according to the study.

The UK imports more than 3 million tonnes of soya every year from Argentina, Brazil and Paraguay, official figures show, the bulk of it to feed factory-farmed animals, mostly chickens.

The report, called Winging it: How the UK’s Chicken Habit is Fuelling the Climate and Nature Emergency, says that meeting Britain’s annual demand for high-protein soya requires 1.4 million hectares of land – an area larger than Northern Ireland.

Greenpeace, which is calling on food giants to set meat-reduction targets, surveyed 23 UK supermarkets and fast-food and coffee chains about their chicken sales and soya usage. It says it found:

Supermarket promotions of chicken legs more than doubled last year, and price cuts trebled, according to market research by Kantar.

But a Roundtable on Sustainable Soya report, also last year, found that just 2 per cent of the UK’s imports come from zero-deforestation areas. And Greenpeace says not a single company it contacted was able to show it tracked the full amount or origin of the soya used as animal feed in its supply chain.

The Amazon is protected from further expansion for soya production by a 2006 ban but other areas with vital ecosystems such as the Cerrado and the Gran Chaco – South America’s second largest forest – are still being exploited, the report shows.

The Cerrado Manifesto, launched in 2017, calls on companies to voluntarily pledge to curb further deforestation.

Cattle ranching is also a big cause of forest loss but most Brazilian beef is consumed in the country, leaving soya “a more significant component of many countries’ deforestation footprint”.

Greenpeace UK forest campaigner Chiara Vitali said: “Consumers cutting red meat are clearly trying to do the right thing for the right reasons but supermarkets and fast-food restaurants are keeping them in the dark when it comes to the precious forests being destroyed.

“A straight swap from beef to chicken effectively amounts to outsourcing emissions of our meat consumption from the UK to South America.”

Leah Riley Brown, of the British Retail Consortium (BRC), said: “Retailers are working together to tackle deforestation and drive greater uptake of certified sustainable soya in their supply chains.

“The BRC has publicly called on the Brazilian government to stop Amazon deforestation for soy production and is working with other stakeholders to ensure soya sources meet customer expectations on sustainability.”

A Tesco spokesman said: “We agree with Greenpeace that more must be done to stop deforestation linked to food production. This is why we will source all the soya we use as animal feed from verified zero-deforestation areas by 2025 and are leading efforts to develop the Funding for Soy Farmers in the Cerrado initiative, which will protect biodiversity by preventing any new land being cleared for soya production.”

McDonald’s said it aimed to eliminate deforestation from supply chains by 2030. “We are prioritising by the end of 2020 the raw materials our suppliers buy in greatest volume and where we can have the biggest impact: beef, chicken (including soya in feed), palm oil, coffee and the fibre in packaging. We are committed to sourcing soya for chicken feed that does not contribute to deforestation, and have identified the regions with high deforestation risks. In 2018, approximately 74 per cent of the soya used in the feed of chickens supplied to our restaurants in Europe was covered by a combination of ProTerra and Roundtable on Responsible Soy certification,” a statement said. “In 2017, we became one of the first companies to sign the statement of support for the Cerrado Manifesto.”

A Nando’s spokesperson said:​ “We’re proud that for four years, all our soya has been responsibly sourced under the Round Table on Responsible Soy, ProTerra or equivalent standards. This is not just the soya we use as an ingredient but also in our supply chain, which means we buy credits to cover the volume of soya fed to our chickens. We’re always striving to do more. In 2017, we joined over 60 companies in signing a statement of support for the Cerrado Manifesto and we’re proud to be an active member of the UK Roundtable on Sustainable Soya.”

A Burger King spokeswoman said most of its chicken was sourced from the UK and Europe, and only some from Brazil. “However, we hold supplier commitments that neither the poultry nor the feed it is raised on is former rainforest land. We are working with our suppliers on an ongoing basis to review the systems they have in place to ensure these accreditations can be upheld.”

A Subway spokeswoman said the chain had a sustainable soya policy. “We therefore require our franchise owners’ suppliers to comply with this policy and to continually increase the amount of RTRS-certified soya used in Subway products with the ultimate aim of achieving 100 per cent certified sustainably sourced soy by the end of 2020. The Subway brand has a zero-deforestation policy. Suppliers are required to source all raw materials from areas which haven’t been subject to deforestation, or from areas of high conservation value.”

A KFC spokesperson said it had been in touch previously with Greenpeace over the issue, and would welcome further discussion. “KFC UK and Ireland supports long-established policies against deforestation and a commitment to work with our supply chain partners to sustainably source key produce and commodities, including chicken and soya. We are actively engaged in this issue and looking at how we strengthen our policies to do all we can to eliminate deforestation risk, working with our global teams and partners such as WWF to ensure that any sourcing decisions we make are informed and sustainable ones.”

Regards to all – Happy Plant based eating ! – Mark

With thanks to Stacey at Our Compass     https://our-compass.org/2020/01/27/do-people-care-about-the-other-crisis-killing-koalas-kangaroos/      for this interesting article – taking the Australian bushfires a step further (back) and getting people to consider the animal killings that take place regardless of the current fires.   Like:

“The World Wildlife Fund reports an estimated 45 million animals are killed each year in the Australian state of Queensland alone just from bulldozing of their habitat, a crisis they note is “driven primarily by the livestock industry“.

Do People Care About the Other Crisis Killing Koalas & Kangaroos?
by Stacey

Source Free From Harm
By Ashley Capps
As Australia’s unprecedented bushfires continue to rage, heartbreaking images of scorched koalas and charred kangaroos have devastated viewers around the globe. An estimated 1 billion or more animals have died in the fires, but it’s the pitiful photos of flame-chewed koalas being carried from the blaze like bewildered, beat-up babies that have perhaps most captured our collective sympathy and despair; along with the images of beleaguered kangaroos, their normally genial silhouettes frozen in panic against a backdrop of roaring orange.

It is unbearable to witness. 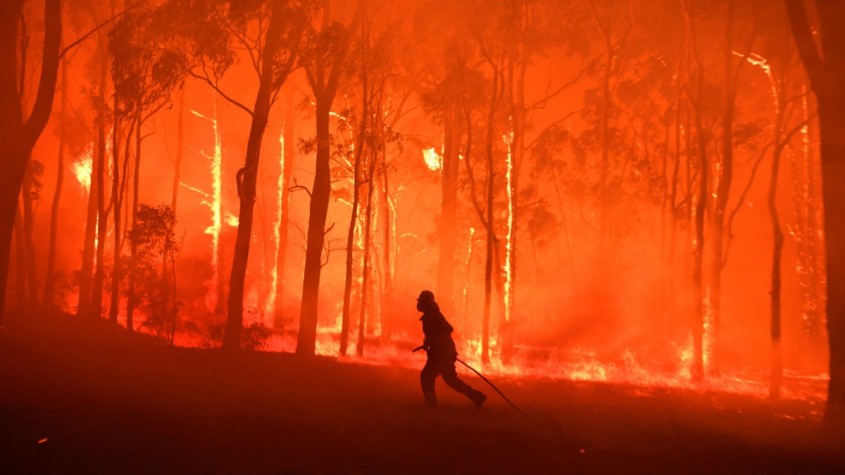 Thankfully, these same images have also inspired millions of people to donate to rescue groups on the ground retrieving animals from the fires and tending to their injuries. But as the surge of combined sorrow and sympathy for these iconic animals swells around the world, I find myself wondering: What about the other crisis that is killing Australia’s koalas and kangaroos, and in even greater numbers?

The World Wildlife Fund reports an estimated 45 million animals are killed each year in the Australian state of Queensland alone just from bulldozing of their habitat, a crisis they note is “driven primarily by the livestock industry.”

In just 4 years, between 2012 and 2016, bulldozing of trees killed at least 5,183 koalas in the state. Queensland RSPCA’s Mark Townend notes, “The mass suffering, injury and needless deaths of wild animals caused by the bulldozing of their forest homes is largely hidden but it is Queensland’s greatest animal welfare crisis.”

Queensland had the largest koala population on the continent in 1990, with an estimated 295,000; but in just 20 years that number decreased by more than 40%, while on the Koala Coast, 80% of these animals have been lost.

Thousands of koalas continue to be killed each year as more forests are cleared for cattle grazing in response to consumer demand for beef. But it’s not just Queensland. In Australia as a whole, “beef cattle production is the major driver of tree-clearing.”

The same industry is also terrorizing and destroying kangaroos en masse. Since the year 2000, an average of more than two million kangaroos per year have been shot by commercial shooters for the meat industry.

Take PETA’s Cruelty-Free Shopping Guide along with you next time you head to the store!

The handy guide will help you find humane products at a glance. Order a FREE copy HERE