So Join Us In Trying To Find Them ! 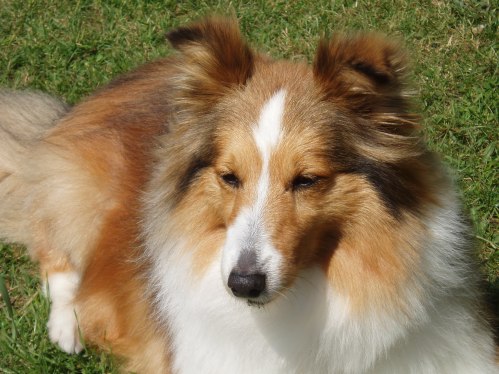 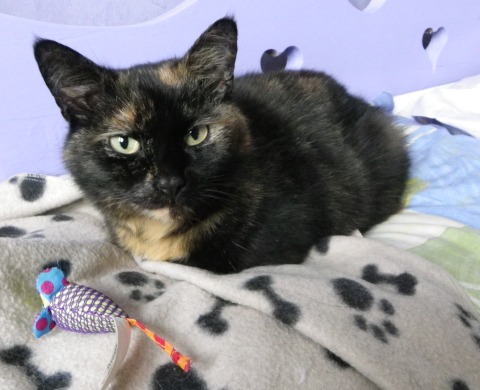 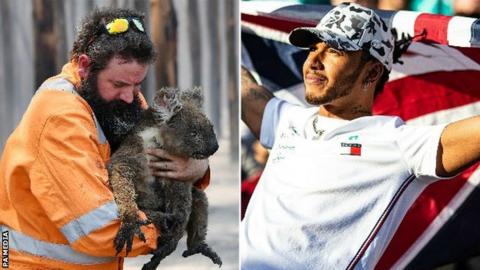 Lewis Hamilton says he will donate more than £380,000 to support the fire service and animal welfare charities affected by fires in Australia.

The Formula 1 world champion pledged US $500,000 and says he “can’t help but grieve for the defenceless animals thought to have died” in the fires.

The bushfires have burnt more than 6.3 million hectares across the country and 27 people have died.

Alongside a video of a koala being rescued, the 35-year-old Mercedes driver wrote: “It saddens me deeply to know that over 1 billion animals in Australia died a painful death, no way out, not their fault 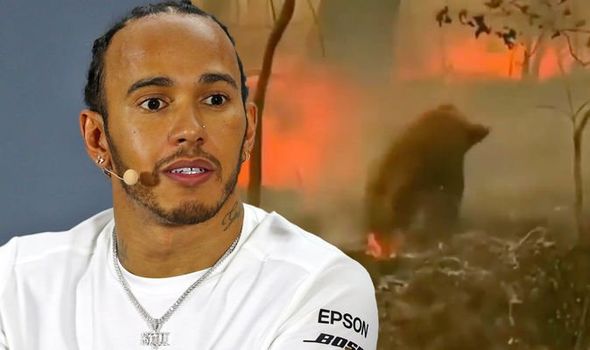 “My love of animals is no secret and I can’t help but grieve for the defenceless animals thought to have died so far, pushing certain species closer to extinction.

“I’m lucky enough to visit Australia often and I know first-hand how beautiful the country is. Keep fighting Australia. I’ve spent some time speaking to people in Australia who are working at the heart of this and I’m filled with admiration for everything they are doing.

“I implore you to join me in thinking about the impact we are having on our planet. Let’s work together to make small changes, and encourage our family and friends to do the same, so we can help shift the direction we’re going in.”

Hamilton’s donation – which is in US dollars and converts to roughly £383,000 – will go to WIRES Wildlife Rescue, WWF Australia and the Rural Fire Service.

In a moving display, a herd of 17 Asian elephants visited a deceased herd member’s burial site, in Andhra Pradesh, India, to mourn their lost family member. This heartfelt moment exemplifies the strong social and familial bonds that elephants frequently form.

A day earlier, the herd wandered into a field. One member came into contact with a live cable wire, which tragically electrocuted him to death. Nearby elephant trackers diverted the herd away from the site and buried the poor elephant where he died.

When the surviving herd members returned a day later, they repeatedly circled the burial mound, stampeding the mud and making sorrowful trumpeting noises. After paying their respects, all 17 elephants retreated into the forest.

“The sentiments of the elephants had moved not only the forest personnel, but also the farmers, who despite suffering crop damage have not made a complaint of it,” Forest Range Officer K. Madhan Mohan Reddy told The Hindu. “We are just bowled over by their gesture.”

Forest officials predicted the herd’s return to the site and took precautions to prevent another tragedy.

“As per our request, the power was disconnected through all low-lying cables across the fields in the vicinity of the mound,” Reddy explained. “The power officials are now increasing the height of the power lines or shifting the locations of the poles.”

Elephants are well-known for grieving their herd members’ deaths for extended periods of time. These rituals and behaviors remind us of their ability to feel complex emotions, a capacity often mistakenly thought of as uniquely human. Elephants clearly experience sadness, love, compassion and distress.

Various other animals, including orcas, humpback whales, lemurs, and chimpanzees, also mourn their dead. Grieving symbolizes the close relationships animals form between family members and helps them achieve closure after losing a loved one.

As the recently-observed Asian elephants’ funerary ritual shows, mourning is not a process unique to the human experience.

After a two-day employment tribunal in the U.K., a judge officially ruled on January 3 that ethical veganism is a philosophical belief, akin to religion, and should be protected by the law.

Vegan zoologist Jordi Casamitjana brought the landmark case to adjudication. He accused the League Against Cruel Sports of firing him after he revealed to colleagues that the company’s pension fund invests in businesses participating in animal testing.

Casamitjana decided to take action and ascertain whether ethical veganism can be classified as a protected “non-religious philosophical belief” and, therefore, be defended by the Equality Act 2010.

In his ruling, Judge Robin Postle pronounced that ethical veganism does meet the criteria required to qualify as a philosophical belief under the act.

“I am satisfied overwhelmingly that ethical veganism does constitute a philosophical belief,” he said, “and it is now a new protected characteristic.”

“I’m extremely happy with the outcome of this hearing and for the words of the judge who clearly understood what ethical veganism is,” commented Casamitjana after hearing the ruling. “I am not alone. Many people have supported me because they or their friends have experienced discrimination for being ethical vegans. Hopefully, from my dismissal something positive will come by ensuring other ethical vegans are better protected in the future.”

“Better protection means more vegans will be able to be open about their beliefs,” he added. “This can only be a good thing for the billions of animals still exploited by humans, an environment under duress, and stressed public health.”

In February, the tribunal will rule on whether the League Against Cruel Sports wrongly dismissed Casamitjana, discriminating against him due to his philosophy of ethical veganism. 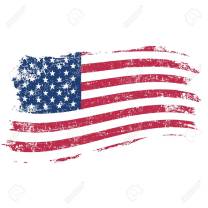 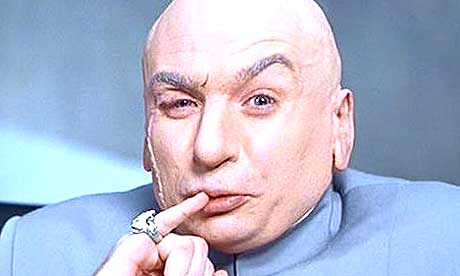 It’s time to pick the most outrageous eco-villain of 2019, and we need your help.

See our nominees and click here to cast your vote.

For years we’ve given out our Rubber Dodo Award to spotlight those who are destroying wild places, driving species extinct, and tearing down the planet’s life-support system. Named after the most famous extinct species on Earth, this award does not come with a cash prize.

Learn more about this year’s nominees and cast your vote by Jan. 15.

Below are some powerful images by environmental activist Robin Wood however, shows the effects of man’s effect on the natural world in a exceptionally powerful way. 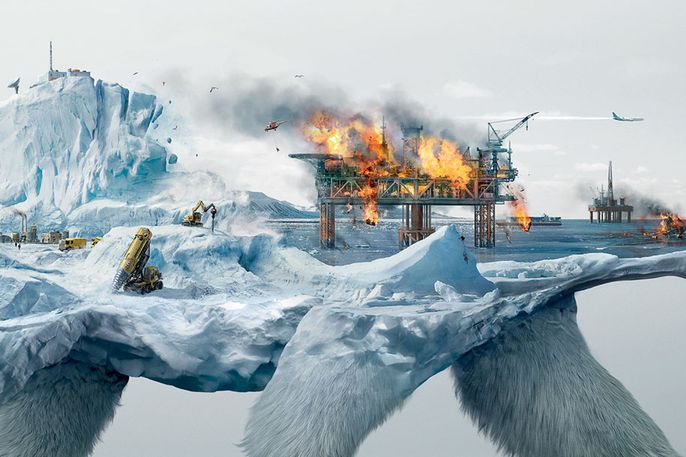 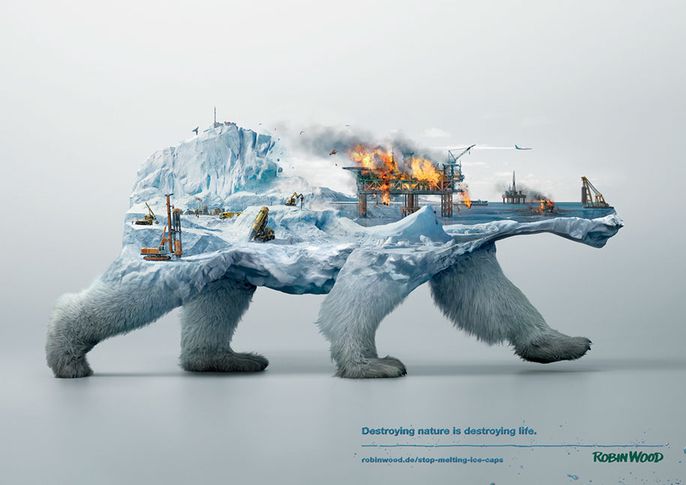 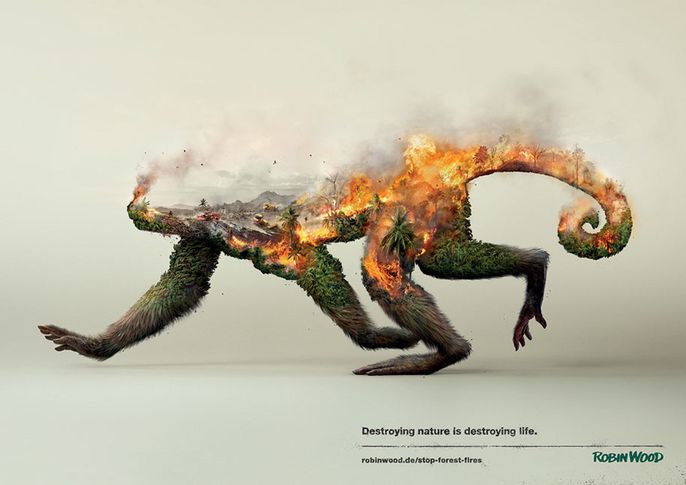 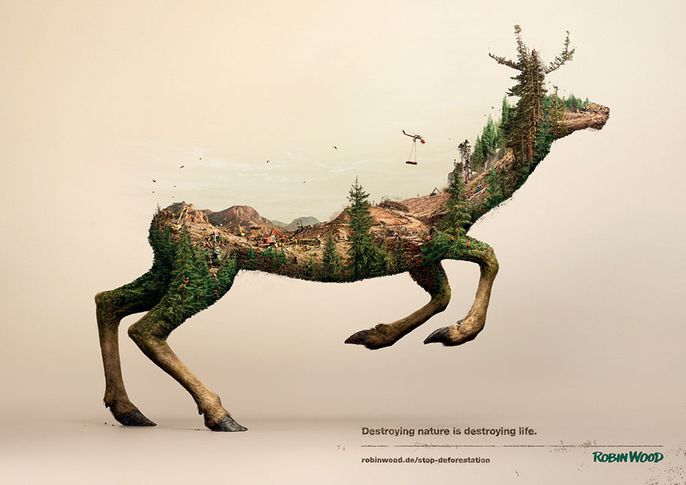 David Bernhardt: For suppressing data showing pesticides harm at least 1,400 protected species, Trump’s interior secretary was under inspector-general investigation just four days after he got the job. A longtime lobbyist for polluters, he’s worked for decades to weaken the Endangered Species Act. As our interior secretary, he’s the ultimate fox guarding the henhouse. Bernhardt has launched an all-out attack on protections for America’s wildlife.

Donald Trump, Jr.: Donald the Younger’s never met an endangered species he doesn’t love to cuddle — once it’s dead. A trophy hunter of African elephants, leopards and Cape buffalo, he likes to have his picture taken with their bodies (once, holding an elephant’s severed tail). Recently, in Mongolia, he killed a threatened argali sheep — a species whose population had dropped 50% between 1985 and 2009. 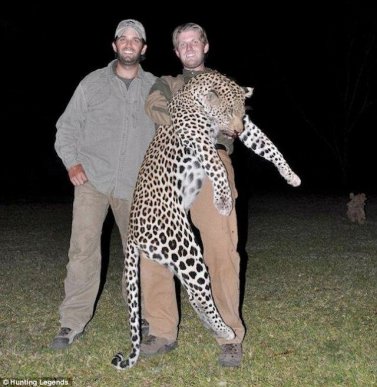 Stephen Miller: This far-right advisor to the president is like the long-lost brain Trump never had. Sadly, that brain is racist. Miller has guided American immigration policy into the realm of outright inhumanity. His whispers in Trump’s ear are likely behind a ban on immigrants from Muslim countries, a shameful practice of removing children from their parents at the U.S.-Mexico border, and construction of a destructive border wall across precious wilderness. 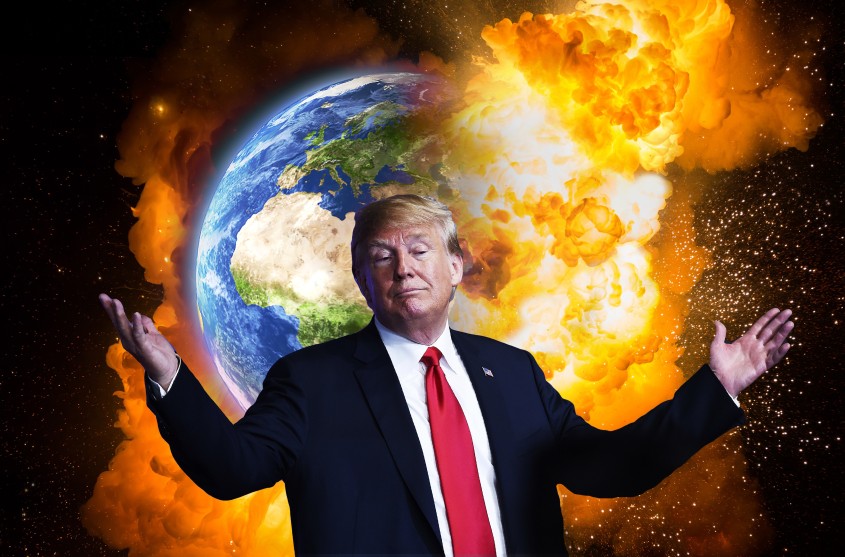 See the video via this link: 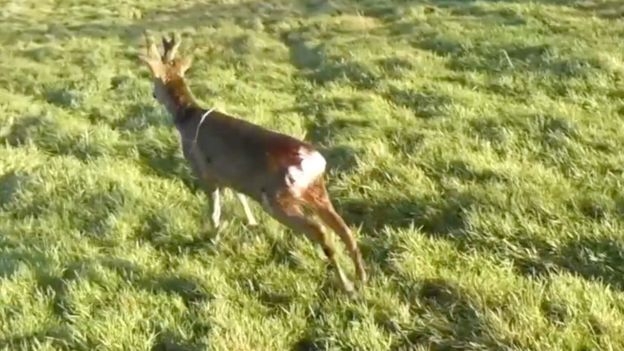 A video showing a pack of hunting dogs mauling a roe deer as it tries to escape has been released.

The group claimed the dogs were from the Badsworth and Bramham, Moor/York and Ainsty South hunting groups and were “out of control”.

A spokesperson for the hunt described it as an unfortunate incident, but blamed the saboteurs.

The video showed the deer being caught by the dogs and attacked three times before it manages to escape.

North Yorkshire Police said it had received reports of a deer which had been injured by dogs at about 13:45 GMT on Saturday.

The force said officers had attended the location and appealed for anyone with information to get in touch.

In England and Wales, it is illegal to use dogs to hunt foxes, hares or deer, unless it is defined as “exempt”.

The protesters, who posted the clip on their Facebook page, said the hounds “came across a deer, repeatedly bringing it to the ground, along with killing a rabbit”.

The group said “the dogs were not under the control of either huntsman or whipper”.

He said: “Distressing footage of some of the hound pack chasing and mauling a roe deer… It’s time for this to end.”

A spokesperson for the York and Ainsty South Hunt said: “We are aware of an unfortunate incident which took place on Saturday, 4th January, which happened purely as a direct result of the actions of the anti-hunting activists.

“These hunt saboteurs were blowing a hunting horn and distracting the hounds which took a few of them off the trail which had been laid for them to follow.

“It is desperately unfair on our hounds if somebody else blows a horn too.”