Trophy Hunters Like the ‘Professional Huntress’ Must be Stopped 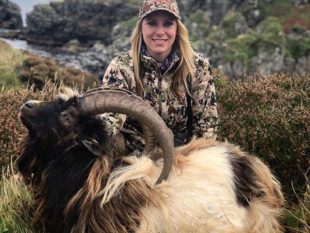 Recent social media photos showing a self-proclaimed “professional huntress” and the carcasses of animals she killed in Scotland have caused worldwide outrage, as well as sparked concern within the country’s government. Larysa Switlyk, host of a hunting television show from Florida, posted images of herself posing alongside the dead goats, stags, and sheep that she shot with a high-powered rifle.

Deer and goats are currently legal to hunt in Scotland due to the nation’s so-called “sustainable land management plan.” But the government may change this following photos like these. Member of the Scottish Parliament Michael Russell called the images “horrific” and stated that it is unacceptable “to see people in camouflage with highly powered sniper rifles rejoicing in the killing of a goat, let alone a ram.” Sign below to demand an immediate ban on all trophy hunting in Scotland.

Social media photos showing a “professional huntress” alongside the carcasses of animals she shot and killed are, as MSP Michael Russell states, “horrific,” and call into question Scotland’s policies regarding trophy hunting. Unnecessary killings for sport and trophies are cruel and irresponsible, and must not be accepted by the Scottish government.

Russell rightly points out that it is unacceptable “to see people in camouflage with highly powered sniper rifles rejoicing in the killing of a goat, let alone a ram.” This brutality is not sustainable land management.  I urge you to ensure that all trophy hunting is immediately banned in Scotland.