My little darling Arianne crossed the rainbow bridge this afternoon. This is why I have not done any posts for the last day or more. She had a really aggressive form of stomach and abdominal cancer which has taken her from a strong and healthy cat to a lifeless little soul in just a matter of weeks. Sudden; very sudden.

A very similar situation to that of Eco warrior Polly Higgins who died just a few weeks ago – see our post at https://worldanimalsvoice.com/2019/04/25/eco-warrior-polly-higgins-has-died/

‘Ari’ as she was known to all, first became my good friend about 15 years ago; when I captured and saved this little mite who was out on the streets. She had lost a large part of her coat; probably due to very little food; and was simply in a real sorry state. I took her to a veterinary friend to see if she had any microchip – we scanned her; found nothing; and so I remember telling her on the way back home in the car that she was going to have to put up with me from now on !

I named her Arianne after a girl in a track from one of my favorite bands – Led Zeppelin – https://www.youtube.com/watch?v=z0DAnu5Sq6k – I played it a lot – thanks ‘Planty’.

She was special; as all our own pets are. She had a real habit of jumping up onto my lap whilst I was trying to write posts for either this (WAV) site or the sister site, ‘Serbian Animals Voice’ – https://serbiananimalsvoice.com/ Her situation at home on my lap made it all the more difficult to get easy access to the keyboard as I had to perform a series of convulsions with my arms; but that was always after she had been welcomed and given hugs and strokes first. At times I considered getting her opinion of things from a cats perspective; but I never followed up with it.

She was so strong and ‘street wise’ – and in all her time with me I think we probably only saw the vet a few times for relatively simple ailments. So watching her go downhill so suddenly in the last 3 or 4 weeks has really been a shock to me. She was suffering and in pain, not eating or drinking; and this afternoon, (3/5) I decided with massive deep regret that I could not continue to watch her deteriorate to nothing but skin and bone over the next week or so. I consulted, and there was no cure for her condition; in the end she would have died from the cancer and from lack of food and fluid intake. It is always immensely difficult to decide when to say goodbye to a loving and cherished companion; but for me, today was the day – animal welfare comes as the priority wanting before my own personal wishes of keeping her, come what May, and the suffering which would go with it.

It was really bad for me personally at the time this afternoon, but she passed here in her own home; being stroked and spoken to gently by a couple of us; telling her what a great little friend she was; so she did not die alone and in a strange place; unlike the many millions of strays, factory farmed prisoners, or lab imprisoned innocents who suffer at the hands of us; good (?) old man every single day.

With love; lots of good food and a caring home; her coat regrew from nothing in the start, becoming a beautiful black / brown in the early days. As time went on; her coat changed, showing more and more of the beautiful little ‘Tortoiseshell’ that she was.

I sometimes used to call her ‘Moonbear’, as she always reminded me of the bears rescued by Animals Asia – a little golden yellow patch on her chest – see the picture.

Wherever she has gone today; I hope she runs free and with full health and vigor once again. If she brings just half the joy to another owner somewhere that she delivered to me, then they will be a very lucky person.

Run free Ari and wait for me at the bridge; I will be back to reunite with you someday. 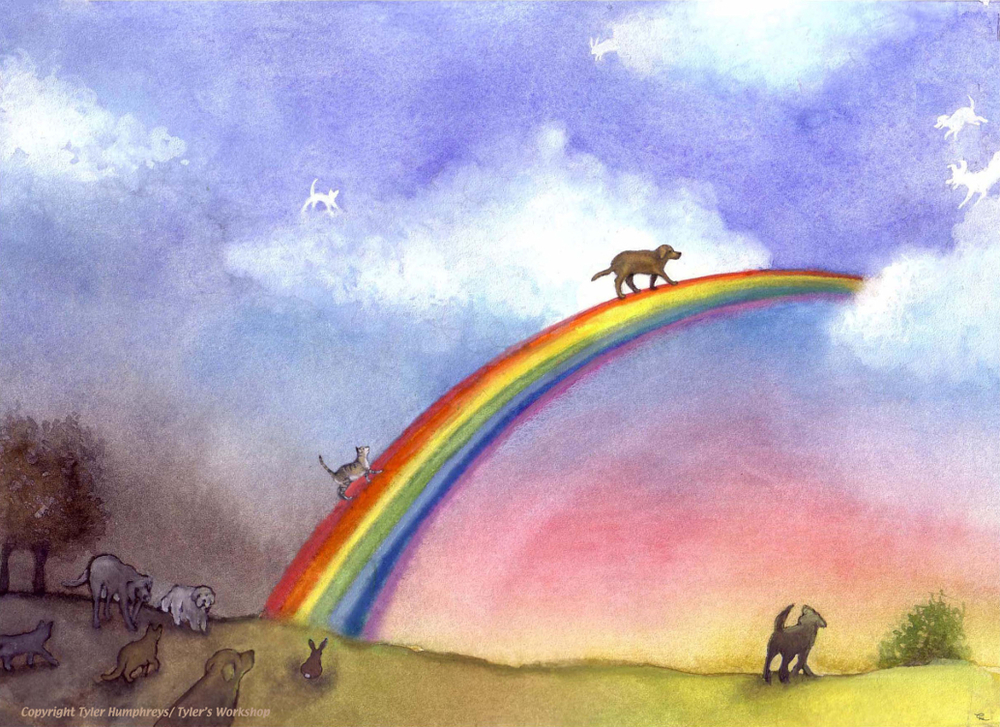 Leeds, UK: They are first fed and then slaughtered: dealing with two pigs at a British school provides heated discussions.

Actually, Farsley Fields elementary school in Leeds, UK, sounds like a real idyl: on a small farm belonging to the school grounds, teachers and children plant fruits and vegetables together and look after the animals living there.

In addition to chickens, this year includes two pigs, as can be seen from the homepage of the school. But exactly these pigs are now causing a lot of excitement.

The two Gloucester Old Spot breed pigs being reared on the farm.

Because the supervising headmaster Peter Harris wants to slaughter the animals during the summer holidays. This is how the children should learn where their meat comes from. “The pigs will not be pets and only be with us for nine months,” read the school homepage. “The pigs will live twice as long as those commercially bred for slaughter and will live a true and free farm life.” The meat is to be sold afterwards.

Charlotte Heap and classmates with the pigs being reared on the school’s farm.

For this at least unusual action receives the British teacher much headwind – but also support. The comments on the school homepage contain both clear hostility and support for the idea of explaining to children the origin of their food. The Internet already has an online petition urging headteacher Peter Harris to abandon the plans has been running for around six months now and has gathered more than 4,000 signatures.

Set up by a former pupil, it explains that she loved attending the school but was concerned about the message current pupils would take away from the animals being sent to slaughter.

She wrote: “I am vegan for the animals, so my main concerns are with the well being of these pigs who don’t deserve to die, and the message that we will be teaching the children at Farsley Farfield that it is okay to exploit and kill animals with the only justification being that people enjoy eating their bodies.”

But Mr Harris defended the school’s position, saying it would actually teach the children more about the provenance of their food and issues around animal welfare.

Charlotte Heap with her letter to the editor of the Yorkshire Evening Post.

Now 11-year-old Charlotte Heap, whose mum also teaches at the school, has written to Yorkshire Evening Post editor Hannah Thaxter, saying Farfield is one of the best schools in the city and its pupils are lucky to go there. In her letter she says parents were consulted about the plans, the children have understood the pigs would go to slaughter from the start and “no one is upset” about it.

She sheds light on the school’s award-winning work, what pupils learn from being able to spend time at Farfield Farm and what rearing the pigs has taught them.

“Most of us are fine with the idea. Some of us quite like the pigs and brushing them down. We’ve all learned a lot from this – where our food comes – and Mr Harris is a vegetarian himself. He wants people to make their own choices in life and to know where their food actually comes from. I think that’s important”!!!

My comment: “The pigs will not be domestic animals and only live with us for nine months”
That’s how Mr. Harris decided.
Which is not very different from that practiced by the butcher next door.
The butcher also says, like Mr. Harris, that pigs are not home animals, but food for children, teachers and other animal-loving meat consumers!!

But Mr. Harris does not want to be compared to butchers, that’s why he changes the decor a bit.

And Mr. Harris means that as soon as he keeps the two pigs as free copies of the meat industry in the garden of the school, the children know the full truth of where their meat comes from.

So far, it is going well with the “truth”, but with the finale of this action, Mr. Harris has some difficulties.
Either way, he has to butcher the pigs, and in front of the children.
He has to do that so that his message arrives, namely: even free-living pigs do not escape the butcher’s sharp knife.
Such is the fate of non-pets, that’s what we humans have decided.
( Except of Korean, Chinese, Indonesian and Vietnamese pets, of course ).

We would recommend to Mr. Harris to visit a pig farm with his students so that he can conduct his experiment under “realistic” conditions.
And to prove us all that he is serious about education!