The murders in the meat industry all have the same goal: to make money with the blood and suffering of the animals. This also applies to most politicians and lobbyists.

A few days ago, a ship with 70,000 (still) living beings has been send from the Romanian port Midia to the Midle East.
The hangmen of the Muslim and Jewish slaughterhouses are a bit different from the hangmen of European slaughterhouses.
To understand this, the following video will help:

“Shot in December 2018 in a slaughterhouse in Aveyron, these images show the legal abuse of slaughter without stunning allowed in France by derogation for the Jewish and Muslim cults.

According to the INRA Animal Pain expert report, an animal shot without stunning can remain conscious for up to 11 minutes”.

The meat lobby is located in the individual countries, which are not interested in getting a handle on the transport problem.
Animal transports mean subsidies from Brussels and that is why corrupt politicians are involved in the business (as we see in the case of the 70,000 sheep from Romania to Midle East ).

In Europe we have something called Animal Welfare.
On the paper, we are right at the forefront.

“Nobody is allowed to cause pain or harm to an animal without an acceptable reason”.

For this we -the Europeans- have entrusted to some brain-brillant commissioners the preservation of this law. With our voice and our money.

In recent years, however, we observe a provocative cooperation (man calls it tolerance) of the “competent” commissioners with the animal transport mafia, and especially with countries that, as poor and weak EU partners, the meat business under any circumstances operate because that’s their main financial source. With devastating consequences for the animals.

They try to enforce their own interests and power games, nobody controls them, ( because according to EU, animal welfare is “country thing” ) so their chances of maximizing their profit are very high.
Let’s put it this way: they have all the options to live from the animas und from their suffering.  And they do it.

And now to the case “Midia”, Romania.

“Nobody is allowed to transport 40-degree-a-day animals without water and food, unless one manages to make millions of them.” says the brain-brilliant Commissioner Andriukaitis a word of power, but finally the EU has learned to respect the law of the strongest, and thus ships the Kuwaiti Transport Mafia (with the permission of the Romanian Minister) the 70,000 animal victims in countries that do not need to give an “acceptable” reason for the muslim massacre, because they consider animal welfare as unacceptable!

With that, the topic animal welfare law is done!
At least for our continent, it’s not even worth the paper it was written on. 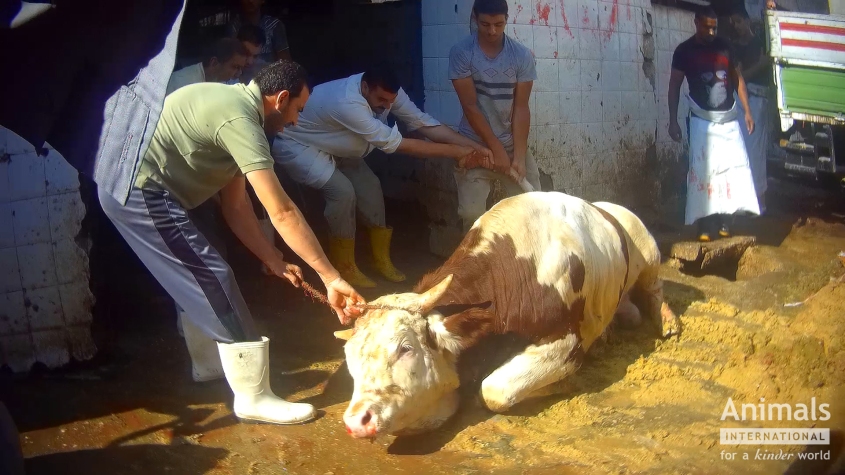 What is it about finally here?

It`s about torment, it’s about deliberate, illegal animal cruelty.
For days in the ship, with pre-programmed and painful death for many animals and with an unimaginable hell for the survivors. That`s about it!
And further, it is about the outrageous hypocrisy of the EU Commissioner, who allows all this, because “who is brutally killed in other cultures, is none of our business”!
Animal welfare is murder thing!!