“As we enter the Year of the Pig, could we resolve to get to know this intelligent animal a little better?” – Eline Helena Schellekens

Today is Chinese New Year and 2019 is the Year of the Pig – a powerful opportunity for us to give pigs a voice. You can speak up for all pigs suffering in intensive conditions right now: just watch and share this compelling, award-winning short film about the life of a factory-farmed piglet, premiering online today.

Every year, across the UK and EU, around 10 million sows and their piglets are locked up for weeks at a time in farrowing crates. Trapped in these cages, the mothers can barely take care of their young. The cramped conditions prevent them from turning round, restrict their natural behaviours and cause intense suffering.

‘M6NTHS’ is a short film showing life through the eyes of piglets growing up on an industrial farm, having never experienced the joy of being outside. Filmed on farms in the UK, France and Belgium, it gives a unique perspective into how factory farming treats life as a commodity and fails to recognise that animals are smart, sensitive beings.

For two weeks only, Compassion in World Farming is screening ‘M6NTHS’ on our website, in support of the campaign to End the Cage Age. Catch it while you can – it’s available from 5-18 Feb only!

Produced and directed by the award-winning, Bristol-based filmmaker Eline Helena Schellekens, this powerful film has already won the Panda Award for Best Short – the most prestigious wildlife film award.

All over Europe, people are joining together to free more than 300 million farm animals from a life in a cage. You too can take action to support one of the biggest ever animal welfare campaigns. Watch and share ‘M6NTHS’ today!

Every year, across the UK and EU, around 10 million sows and their piglets are locked up in cages for weeks at a time.

‘M6NTHS’, an award-winning documentary by Eline Helena Schellekens, reveals the suffering that these animals endure by following the life of piglets on factory farms. The film has already won a Panda Award – the most prestigious award for wildlife films.

Compassion in World Farming is sharing this powerful film here for two weeks only, in support of the End the Cage Age campaign. Watch and share it now to show your support – and remember to sign the petition too!

If you think animals deserve a life worth living, please join the movement to End the Cage Age:

The following are not associated with this campaign, but do show the reality of industrialised pig farming in the EU. 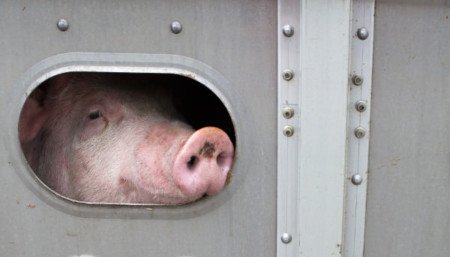